EghtesadOnline: Iran traded 5.3 million tons of non-oil commodities worth $2.25 billion with the E7 group of countries during the first Iranian month (March 21-April 20) to register a 46.47% rise in tonnage and a 1.93% decrease in value compared with last year’s same month.

Latest data released by the Islamic Republic of Iran Customs Administration show Iran’s exports totaled 4.39 million tons worth $1.07 billion during the month to April 20, indicating a 41.79% growth in tonnage and a 10.41% decline in value year-on-year.

As a result, Iran recorded $102.27 million in non-oil trade deficit with E7 countries, according to Financial Tribune.

The E7 (short for "Emerging 7") refers to seven countries, namely China, India, Brazil, Mexico, Russia, India and Turkey, grouped together because of their major emerging economies. The term was coined by economists John Hawksworth and Gordon Cookson at PricewaterhouseCoopers in 2006.

China was Iran’s top export destination both among E7 countries and in the world. 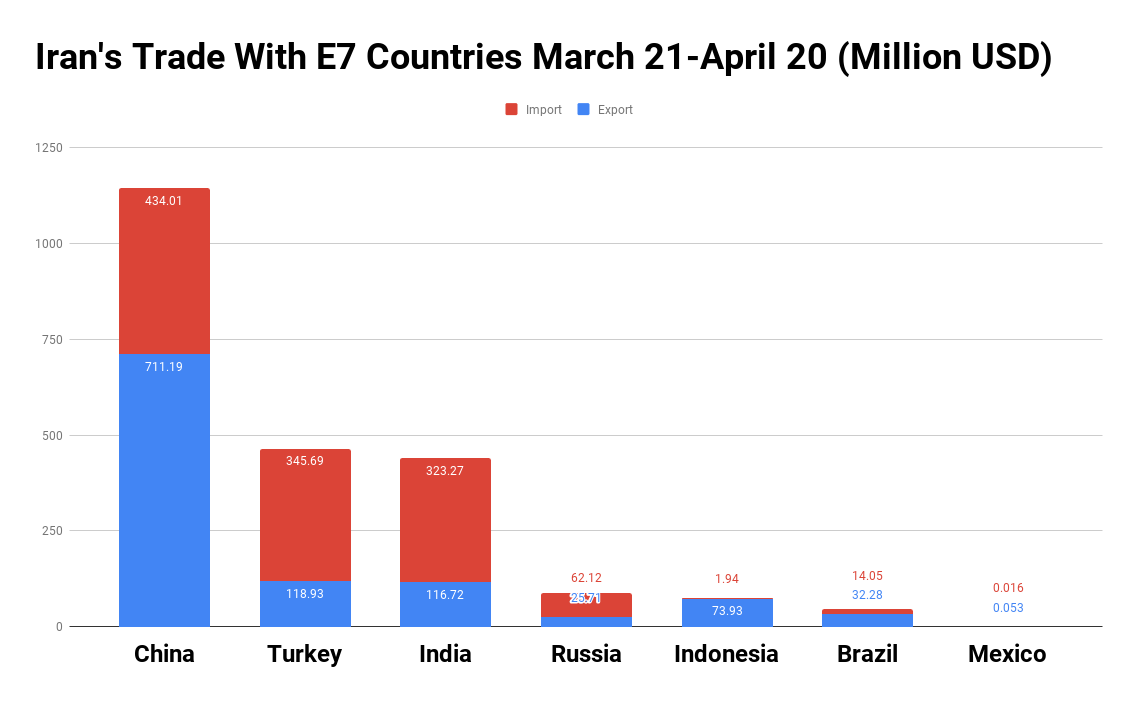 China was the top exporter of goods to Iran among E7 members and also in the world.

Turkey was Iran’s second biggest trading partner among E7 nations during the period, as two-way commercial exchanges stood at 491,247 tons worth $464.63 million, up by 76.76% and 77.76% in tonnage and value respectively YOY.

Turkey was Iran’s second export destination among E7 countries and sixth in the world during the month.

Iran imported 233,483 tons of commodities worth $345.69 million to Iran, up by 206.38% and 159.84% in tonnage and value respectively YOY, which mainly constituted butter, machinery, field corn, cooking bananas and sheep.

India was Iran’s third major trading partner among the states under review.

Trade between Iran and India amounted to 1.09 million tons worth $440 million to register a 13.34% and 36.34% increase in tonnage and value respectively YOY.