EghteadOnline: Iran traded 994,733 tons of non-oil commodities worth $668.67 million with member states of the D-8 Organization for Economic Cooperation during the first Iranian month (March 21-April 20) to register a 3.71% decline in tonnage and a 31.92% rise in value compared with last year’s same month.

Latest data released by the Islamic Republic of Iran Customs Administration show Iran’s exports totaled 728,814 tons worth $278.72 million during the month to April 20, indicating a 21.12% and 16.52% declines in tonnage and value respectively year-on-year.

The D-8 Organization for Economic Cooperation, also known as Developing-8, is an organization for development cooperation among the following countries: Iran, Bangladesh, Egypt, Nigeria, Indonesia, Malaysia, Pakistan and Turkey.

The D-8 objectives are to improve member states' position in the global economy, diversify and create new opportunities in trade relations, enhance participation in decision-making at the international level and improve standards of living. It is a global arrangement rather than a regional one, as the composition of its members reflects.

The forum has no adverse impact on bilateral and multilateral commitments of the member countries, emanating from their membership to other international or regional organizations. The combined population of the eight countries is about 1 billion or 60% of all Muslims, or close to 13% of the world's population and covering an area of 7.6 million square kilometers, 5% of world land area. 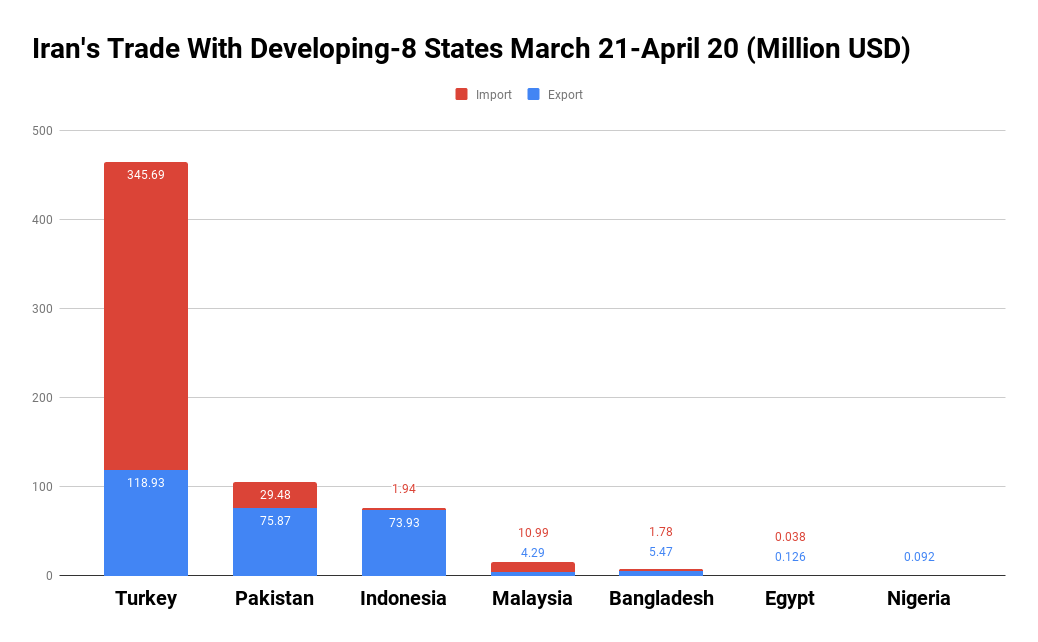 Turkey was the top exporter of goods to Iran among D-8 states and second in the world after China.

Pakistan was Iran’s second biggest trading partner among D-8 nations during the period under review, as two-way commercial exchanges stood at 229,735 tons worth $105.36 million, indicating a 10.53% and 22.27% increase in tonnage and value respectively YOY.

Pakistan was Iran’s second export destination among D-8 countries and eighth in the world during the one-month period.

Pakistan was the second exporter of goods to Iran among neighbors and 13th exporter to Iran.

Indonesia was Iran’s third major trading partner among the states under review.