EghtesadOnline: Iran traded 1.75 million tons of non-oil commodities worth $1.35 billion with member states of the Organization for Economic Cooperation and Development during the first Iranian month (March 21-April 20) to register a 7.13% growth in tonnage and a 4.94% decline in value compared with last year’s same month.

Latest data released by the Islamic Republic of Iran Customs Administration show Iran’s exports totaled 811,123 tons worth $406.44 million during the month to April 20, indicating a 14.29% rise in tonnage and 6.4% decrease in value year-on-year.

OECD is an intergovernmental economic organization with 36 member countries, founded in 1961, to stimulate economic progress and world trade. It is a forum of countries committed to market economy, providing a platform to compare policy experiences, seek answers to common problems, identify good practices and coordinate domestic and international policies of its members.

Turkey was Iran’s second export destination among the countries under review and sixth in the whole world. 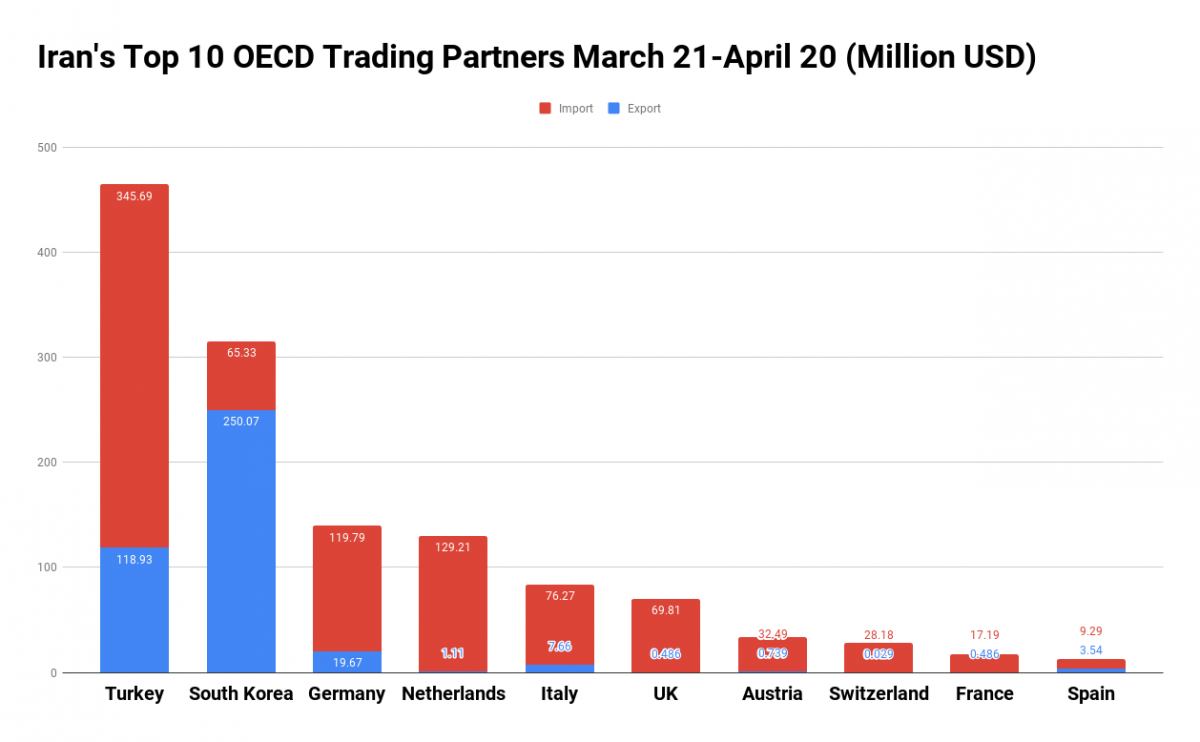 Turkey was the top exporter of goods to Iran among OECD countries and second in the world after China.

South Korea was Iran’s second biggest trading partner among OECD nations during the period, as two-way commercial exchanges stood at 511,565 tons worth $315.41 million to register a 19.8% rise in tonnage and 8.84% decline in value YOY.

South Korea was Iran’s top export destination among OECD countries and third in the world during the month.

Iran’s exports to South Korea included gas condensates, copper concentrate, float glass, marble and saffron. It imported 27,057 tons of commodities worth $65.33 million from South Korea, down 52.34% and 54.75% in tonnage and value respectively YOY, most of which comprised auto parts, steel alloy rolled coil and transportation vehicles.

South Korea was the sixth exporter of goods to Iran among the member states and ninth in the world.

Germany was Iran’s third major trading partner among the states under review.

The Netherlands was the second biggest exporter to Iran among OECD nations, after Turkey, and fifth in the world, as the Netherlands exported 326,032 tons worth $129.21 million to Iran during the month, up by 382.72% and 217.93% in tonnage and value respectively YOY.