EghtesadOnline: Iran traded 3.81 million tons of non-oil commodities worth $1.89 billion with the Organization of Islamic Cooperation’s member states during the first Iranian month (March 21-April 20) to register a 17.72% and 11.4% decline in tonnage and value respectively compared to the previous year.

Latest data released by the Islamic Republic of Iran Customs Administration show Iran’s exports totaled 3.34 million tons worth $1.12 billion during the month, indicating a 22.55% and 30.57% decline in tonnage and value year-on-year.

The Organization of Islamic Cooperation is an international organization founded in 1969, consisting of 57 member states, including Iran, with 47 countries being Muslim-majority countries. Some, especially in West Africa, though they have large Muslim populations, do not have a Muslim majority.

The organization states that it is the collective voice of the Muslim world and works to safeguard and protect their interests in the spirit of promoting international peace and harmony. The collective population of OIC member states was over 1.9 billion in 2018.

Syria was suspended from the organization in August 2012, therefore it was not included in this report.

The UAE was Iran’s second biggest export destination among the countries under review and fourth in the whole world. 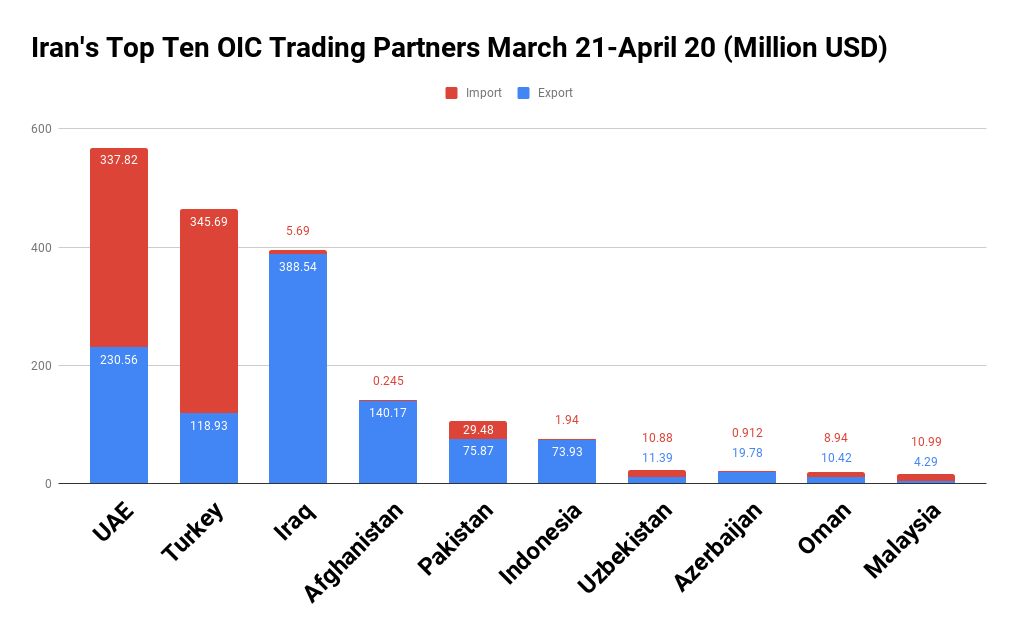 The UAE was the second exporter of goods to Iran among the states and third in the world after China and Iraq.

Turkey was Iran’s second biggest trading partner among OIC nations during the period, as two-way commercial exchanges stood at 491,247 tons worth $464.63 million to register a 76.76% and 77.76% growth in tonnage and value respectively YOY.

Turkey was Iran’s fourth export destination among OIC countries and sixth in the world during the month.

Iran imported 233,483 tons of commodities worth $345.69 million from Turkey, up 206.38% and 159.84% in tonnage and value respectively YOY, which mainly consisted of butter, machinery, field corn, cooking bananas and sheep.

Turkey was the top exporter of goods to Iran among the neighbors and second exporter to Iran in the world after China.

Afghanistan was Iran’s third biggest export destination, after Iraq and the UAE, among OIC states and fifth in the world, as Iran exported 421,049 tons worth $140.17 million to Afghanistan during the period, down by 7.42% and 18.23% in tonnage and value respectively YOY.

Pakistan was the third major exporter of goods to Iran among OIC members, after Turkey and the UAE, during the month as Iran imported 22,156 tons of commodities worth $29.48 million from Pakistan, indicating a 22.05% and 53.53% growth in tonnage and value respectively YOY.

Pakistan was the 13th exporter of goods to Iran in the world during the period.