EghtesadOnline: Iran recorded $5.75 million in non-oil trade surplus with countries in the Balkan region during the first month of the current fiscal year (March 21-April 20).

Latest data released by the Islamic Republic of Iran Customs Administration show Iran traded 12,623 tons of non-oil commodities worth $13.89 million with Balkan states during the month to April 20 to register a 4.58% and 11.99% decline in tonnage and value respectively compared with the same period of last year.

This report considers the abovementioned nine countries without taking into account countries whose land area in the Balkans region is less than 50%, namely Italy (0.1%), Romania (5%), Slovenia (25%) and Bulgaria (3%).

In terms of trade value, Bulgaria topped the list among Balkan countries with Iran trade standing at 8,744 tons worth $8.27 million, up by 70.45% and 64.28% in tonnage and value respectively YOY.

Bulgaria was Iran’s top export destination among the countries under review and 26th in the whole world.

Bulgaria was the third exporter of goods to Iran among the Balkan states and 58th in the world. 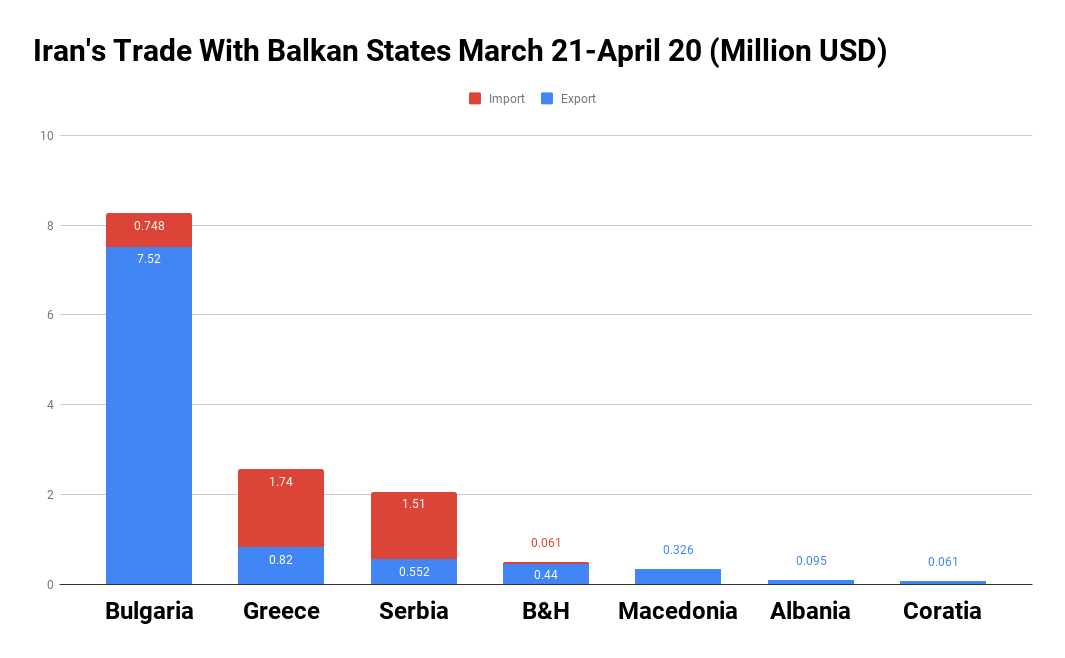 Greece was Iran’s second biggest trading partner among Balkan nations during the month, as two-way commercial exchanges stood at 1,915 tons worth $2.56 million, registering a 55.59% and 33.13% decline in tonnage and value respectively YOY.

Greece was Iran’s second top export destination among Balkan states and 46th in the world during the period.

Iran imported 998 tons of commodities worth $1.74 million from Greece, down 68.67% and 38.09% in tonnage and value respectively YOY, most of which constituted medicines and food products.

Greece was the top exporter of goods to Iran among the nations under review and 44th exporter to Iran in the world.

Mutual trade between Iran and Serbia amounted to 826 tons worth $2.06 million, indicating a 54.19% and 45.29% decrease in tonnage and value respectively YOY.