EghtesadOnline: Iran traded 180,429 tons of non-oil commodities worth $192.82 million with Balkan countries in the last Iranian year (ended March 20, 2019) to register a 21.03% and 14.58% increase in tonnage and value respectively compared with last year’s corresponding period.

Latest data released by the Islamic Republic of Iran Customs Administration show Iran’s exports totaled 159,553 tons worth $134.57 million during the year, indicating a 68.09% and 26.04% increase in tonnage and value respectively year-on-year.

Bulgaria was Iran’s biggest export destination among the countries under review and 35th worldwide. 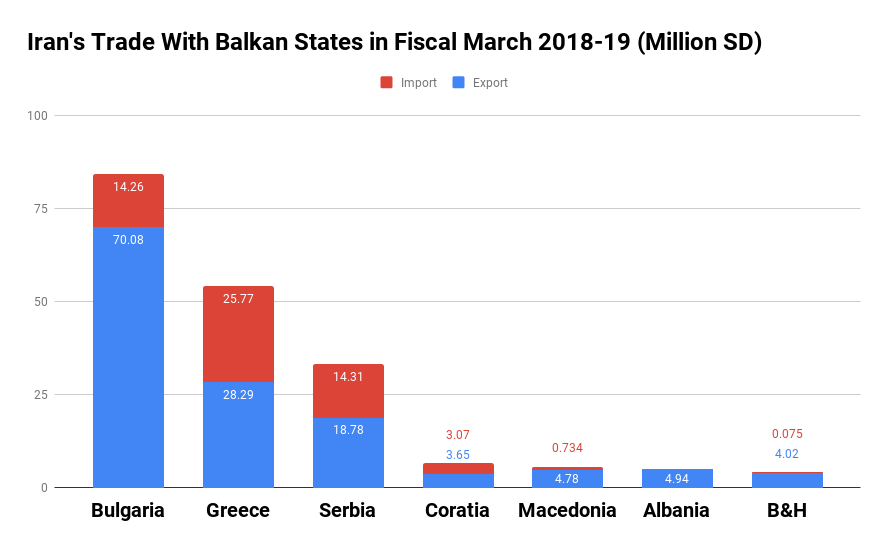 Bulgaria was the third exporter of goods to Iran among the Balkan states and 64th exporter to Iran in the world.

Greece was Iran’s second biggest trading partner among Balkan nations during the 12 months, as two-way commercial exchanges stood at 66,555 tons worth $54.06 million to register a 70.89% growth in tonnage and 3.32% decline in value respectively YOY.

Greece was Iran’s second top export destination among Balkan states and 53rd in the world.

Iran’s exports to Greece included urea, polyethylene grade film and pistachios. It imported 14,351 tons of commodities worth $25.77 million from Greece, down 9.61% in tonnage and up 23.05% in value YOY, which mainly consisted of chemicals, pharmaceuticals and peaches.

Greece was the top exporter of goods to Iran among the Balkan states and 54th exporter to Iran in the world.

Serbia was Iran’s third major trading partner among the countries under review.