EghtesadOnline: Iran traded 43.94 million tons of non-oil commodities worth $23.68 billion with BRICS nations during the 11 months to Feb. 19, registering a 9.47% and 8.34% decline in tonnage and value respectively compared with last year’s corresponding period.

Latest data released by the Islamic Republic of Iran Customs Administration show Iran’s exports totaled 36.69 million tons worth $10.49 billion during the period, indicating a 10.49% and 2.22% decrease in tonnage and value respectively year-on-year.

BRICS is the acronym for an association of five major emerging economies: Brazil, Russia, India, China and South Africa. Originally the first four were grouped as "BRIC", before the induction of South Africa in 2010. The BRICS members are all leading developing or newly industrialized countries, but they are distinguished by their large, sometimes fast-growing economies and significant influence on regional affairs; all five are G-20 members, according to Financial Tribune.

The above figures suggest that Iran's non-oil trade with BRICS nations accounted for 30.14% of the country's overall foreign trade during the 11-month period. Exports to this select group of countries accounted for 26.18% of overall exports, as 34.26% of overall imports came from these five nations.

In terms of total trade value, China topped the list among BRICS member states such that trade with Iran stood at 31.7 million tons worth $17.73 billion, down by 11.46% and 10.6% in tonnage and value respectively YOY. 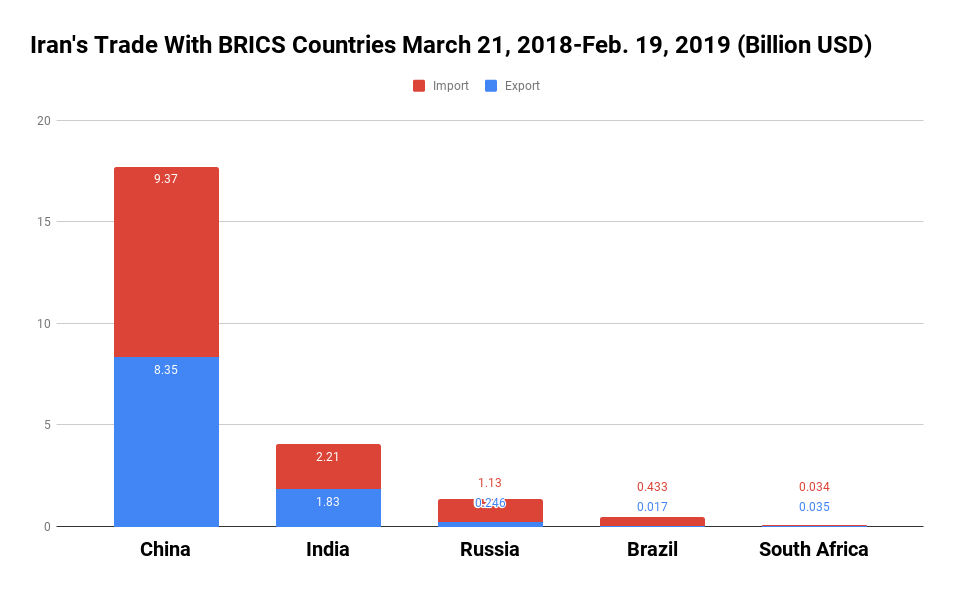 China was Iran’s top export destination among the countries under review as well as among other countries during the 11 months.

China was the top exporter of goods to Iran among BRICS members and also worldwide.

India was Iran’s second biggest trading partner among BRICS nations during the 11 months, as two-way commercial exchanges stood at 9.26 million tons worth $4.04 billion to register a 12.83% and 9.49 decrease in tonnage and value respectively YOY.

India was Iran’s second biggest export destination among BRICS members and sixth among all countries during the period.

Iran’s exports to India mainly included methanol, urea, ammonia and bitumen. It imported 1.67 million tons of commodities worth $2.21 billion from India, up by 4.1% and 9.09% in tonnage and value respectively YOY, which mainly consisted of semi- and whole-milled rice, tea, graphite electrodes used in furnaces and oilcake.

India was the second exporter of goods to Iran among the states under review and fourth among all countries.