EghtesadOnline: Iran recorded a non-oil trade surplus of $8.24 billion with Persian Gulf littoral states, such as the UAE, Iraq, Kuwait, Qatar, Bahrain and Saudi Arabia, during the 11 months to Feb. 19, 2019.

Latest data released by the Islamic Republic of Iran Customs Administration show Iran traded 36.42 million tons of non-oil commodities worth $20.22 billion with Persian Gulf states during the period to register a 1.98% growth in tonnage and 5.46% decline in value compared with last year’s corresponding period. 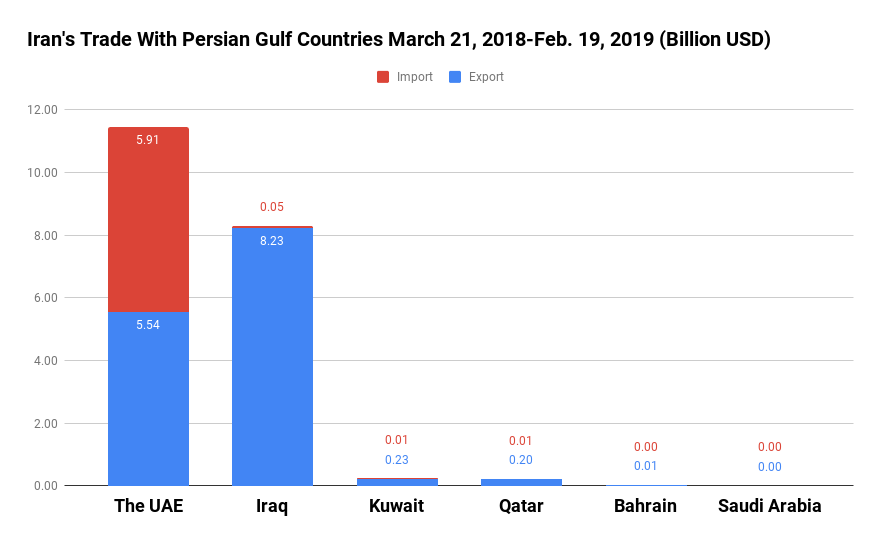 The UAE was Iran’s second biggest export destination among the countries under review and third among all countries.

The UAE was the top exporter of goods to Iran in the Persian Gulf and second among all countries after China.

Iraq was Iran’s second biggest trading partner among Persian Gulf littoral states during the 11 months, as two-way commercial exchanges stood at 18.46 million tons worth $8.29 billion to register a 52.11% and 40.9% growth in tonnage and value respectively YOY.

Iraq was Iran’s top export destination in the Persian Gulf and second among all countries during the period.

Iran imported 67,219 tons of commodities worth $53.57 million from Iraq, down 44.51% and 36.33% in tonnage and value respectively YOY, which were mainly low-density oil, machinery, aluminum alloy and cans.

Iraq was the seventh exporter of goods to Iran in the Persian Gulf and 41st exporter to Iran among all countries.

Kuwait was Iran’s third major trading partner among the states under review.