EghtesadOnline: The interim agreement on the formation of a free trade zone between Eurasian Economic Union and Iran has taken Tehran to a new level of regional economic cooperation and links Iran's economy with other states, a senior Iranian energy official says.

“The signing of the interim agreement shows the fact that Iranian economy has entered a new level of regional economic cooperation,” Davood Mirzakhani, Iranian energy minister's aide in Iran-Russia Cooperation Commission, was quoted as saying by IRNA.

Iran and the Eurasian Economic Union are looking to substantially increase trade, as the two sides signed a three-year provisional agreement on May 17, 2018, for the bloc to welcome Iran into EEU.

The arrangement is the first step in implementing free trade between Iran and the five members of the union. It lowers or abolishes customs duties, setting off a three-year process for a permanent trade agreement, according to Financial Tribune.

Russian Ministry of Industry and Trade said last month that a full-fledged agreement on a free trade zone between Iran and EEU will be concluded by early 2022.

According to the ministry, the interim agreement signed in May covers 50% of the trade between the parties and will enter into force in early 2019. 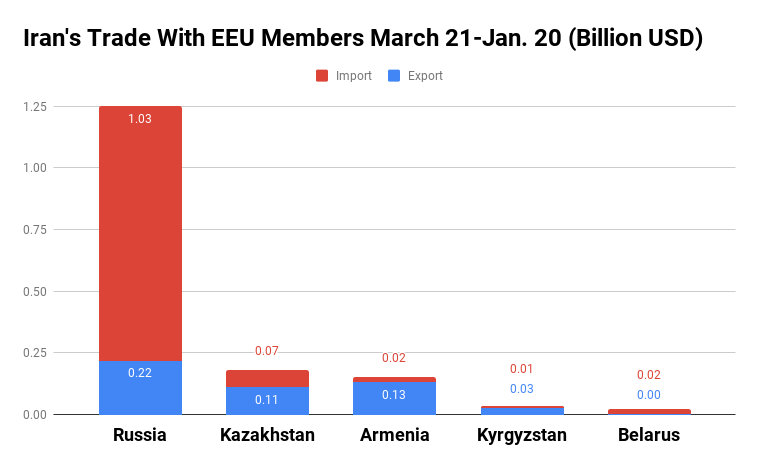 As per the terms of the deal, Iran, which is not a member of World Trade Organization, will assume obligations stipulated by this organization, which will make its trade with EEU members more transparent and predictable.

“The deal has paved the way for linking Iran’s economy with that of the region,” Mirzakhani added.

According to the official, EEU's gross domestic product surpasses $4 trillion per year.

“After the expiration of the three-year period, plans are in store to transition to a full-format agreement on a free trade zone, which will cover all commodities. Negotiations on the transition to the new agreement should be started no later than a year after the interim agreement enters into force,” the Russian ministry said in a statement.

The deal’s main advantages, the ministry noted, is a reduction in import duties and the formation of a “transparent and predictable trade environment”. This will be realized because all countries, including Belarus and Iran, which are not members of World Trade Organization, have agreed to adhere to the rules of this organization.

Adequate Route for Transit Along INSTC

Iran can be a suitable route for transiting EEU member states' goods through the International North-South Transport Corridor.

INSTC is a major transit route designed to facilitate the transportation of goods from Mumbai in India to Helsinki in Finland, using Iranian ports and railroads, which the Islamic Republic plans to connect to those of Azerbaijan and Russia.

The corridor will connect Iran with Russia’s Baltic ports and give Russia rail connectivity to both the Persian Gulf and the Indian rail network.

This means goods could be carried from Mumbai, India, to the Iranian port of Bandar Abbas and further to Baku, Azerbaijan. They could then pass across the Russian border into Astrakhan and proceed to Moscow and St. Petersburg, before entering Europe.

INSTC would substantially cut the travel time for everything from Asian consumer goods to Central Eurasia’s natural resources to advanced European exports.

The multimodal route is estimated to reduce the time and cost of transportation of goods between India and Europe from 40 to 15 days. The corridor is said to have the potential of diverting up to 10 million tons of India-Europe trade to the route.

Currently, 72 million tons of goods are shipped from India to Europe and 25 billion tons are transported in the opposite direction every year.

When completed, INSTC is expected to increase the volume of commodities currently traded between Iran and Azerbaijan from 600,000 tons to 5 million tons per year, dramatically increasing bilateral trade from the current $500 million per year.

This rail route was one of the main missing links along the International North-South Transport Corridor.

A rail route connecting Rasht to Astara on the border with Azerbaijan is another missing link along the INSTC.

Significance Amid US Sanctions

Iran enjoys rich oil, gas and mineral resources and is a capable country in terms of technical and construction expertise. All these elements, which bring about stability combined with a regional economic hub, will turn the country into a major partner of Eurasia, the energy official said.

Mirzakhani stressed that when Iran finally joins the union, it will be a positive step and can play an effective role in protecting Iran’s economy, especially under the new US sanctions.

The senior Iranian energy authority mentioned that joining the Eurasian Economic Union “can be a small-scale and pilot model of joining World Trade Organization”. He noted that Iran's membership can help domestic products become more competitive in bigger markets.

"The Eurasian Economic Union's Free Trade Zone with Iran is the latter’s first serious step in joining larger trade organizations,” he said, calling it “the most important and practical step against the US policy of isolating the country”.

According to Mirzakhani, EEU's imports from Iran in the past two years amounted to $493.5 million, which is 0.2% of its total global imports worth $237 billion.

"Iran’s imports from the union member states stood at $2.1 billion, a meager 0.57% of its total global exports worth $366 billion," he said.

The Iranian government presented a bill to the parliament on joining EEU. Last week, Majlis National Security and Foreign Policy as well as economic commissions approved the bill, meaning it can now be debated by all lawmakers.

The free trade zone treaty can also help Iranian producers export to Europe using preferential trade agreements that some of the union member states such as Kyrgyzstan have with the European Union.

Latest data released by the Islamic Republic of Iran Customs Administration show Iran traded 3.04 million tons of non-oil commodities worth $1.64 billion with the five EEU member states during the 10 months to Jan. 20, 2019, to register a 39.53% and 43.58% increase in tonnage and value respectively compared with last year’s corresponding period.

Iran’s exports to EEU totaled 1.24 million tons worth $494.65 million during the period under review, indicating a 39.28% and 7.59% increase in tonnage and value respectively year-on-year.

With 1.92 million tons worth $1.25 billion, Russia topped the list among EEU countries trading with Iran, registering a rise of 30.27% and 58.19% in tonnage and value respectively YOY.

Russia was also Iran’s top export destination as well as the top exporter of goods to Iran among EEU members during the 10-month period.

In return, Russia exported 1.55 million tons of commodities worth $1.03 billion to Iran, up 40.35% and 75.13% in tonnage and value respectively YOY. Russia was the eighth exporter of goods to Iran in the world.