EghtesadOnline: Iran traded 16.95 million tons of non-oil commodities worth $9.01 billion with member states of Economic Cooperation Organization in the first 10 months of the current fiscal year (March 21, 2018-Jan. 20) to register a 17.78% and 1.75% increase in tonnage and value respectively year-on-year.

Latest data released by the Islamic Republic of Iran Customs Administration show Iran’s exports totaled 15.39 million tons worth $6.57 billion during the period, indicating a 26.04% and 15.5% increase in tonnage and value respectively YOY.

An ad hoc organization under the United Nations Charter, Economic Cooperation Organization is a Eurasian political and economic intergovernmental organization founded in 1984 in Tehran by the leaders of Iran, Pakistan and Turkey. It provides a platform to discuss ways to improve development and promote trade and investment opportunities.

Pursuing the establishment of a single market for goods and services, much like the European Union, ECO's secretariat and cultural department are located in Iran, its economic bureau is in Turkey and its scientific bureau is situated in Pakistan.

ECO consists of predominantly Muslim-majority states and is a trade bloc for Central Asian states connected to the Mediterranean through Turkey, to the Persian Gulf via Iran, and to the Arabian Sea via Pakistan. 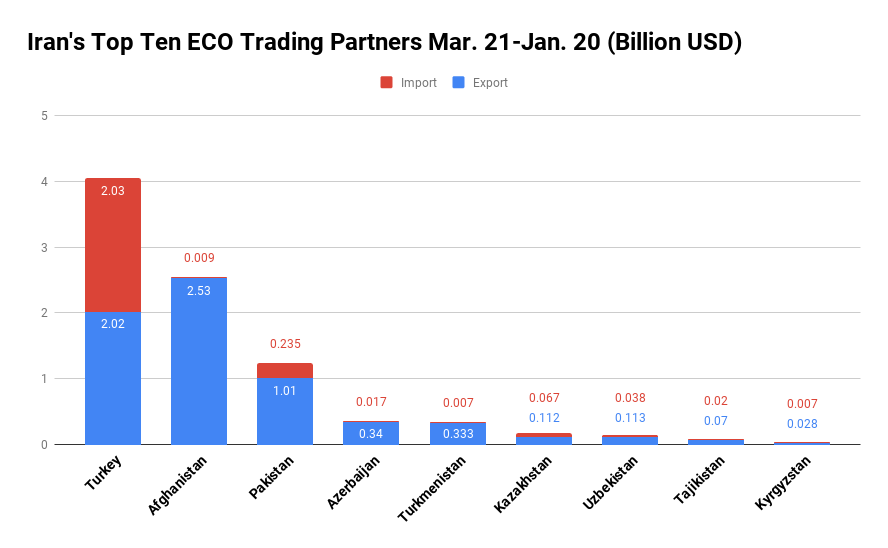 In terms of trade with Iran, Turkey topped the list among ECO countries with bilateral trade standing at 7.2 million tons worth $4.06 billion, up by 28.91% in tonnage and down by 6.34% in value YOY.

Turkey was Iran’s second biggest export destination among the countries and fifth across the world.

In return, Turkey exported 1 million tons of commodities worth $2.03 billion to Iran, down by 36.33% and 23.65% in tonnage and value respectively YOY.

Turkey was the top exporter of goods to Iran among the ECO states and third in the world after China and the UAE.

Afghanistan was Iran’s second biggest trading partner among ECO nations during the 10 months, as two-way commercial exchanges stood at 4.83 million tons worth $2.54 billion to register a 0.80% and 11.77% growth in tonnage and value respectively YOY.

Afghanistan was Iran’s top export destination among ECO states and fourth in the world during the period.

Iran imported 8,399 tons of commodities worth $9.2 million from Afghanistan, down 61.84% and 47.96% in tonnage and value respectively YOY, a majority of which were sesame seeds, plants used for perfume making and medical purposes, lead, oilseeds and fruits.

Afghanistan was the seventh exporter of goods to Iran among the nations under review and 70th exporter to Iran in the world.

Mutual trade between Iran and Pakistan amounted to 2.4 million tons worth $1.25 billion, indicating an 18.42% and 18.29% increase in tonnage and value respectively YOY.

Kazakhstan was the third biggest exporter to Iran, after Turkey and Pakistan, among ECO countries and 37th in the world, as Iran imported 222,407 tons worth $67.11 million from Kazakhstan during the 10-month period, up by 55.02% and 53.58% in tonnage and value respectively YOY.