EghtesadOnline: Iran traded 6.73 million tons of non-oil commodities worth $8.57 billion with member states of the European Union during the first 10 months of the current fiscal year (March 21, 2018-Jan. 20) to register a 15.52% and 18.76% decline in tonnage and value respectively compared with last year’s corresponding period.

Latest data released by the Islamic Republic of Iran Customs Administration show Iran’s exports totaled 1.05 million tons worth $900.67 million during the period, indicating a 18.36% and 27.33% decline in tonnage and value respectively year-on-year.

The European Union is a political and economic union of 28 member states located primarily in Europe.

In terms of total trade value, Germany topped the list among EU states with bilateral trade with Iran standing at 703,103 tons worth $2.22 billion, down by 7.53% and 16.46% in tonnage and value respectively YOY.

Germany was Iran’s second biggest export destination among the countries under review and 19th in the world.

Germany was the top exporter of goods to Iran among the EU states and fourth in the world.

Italy was Iran’s second biggest trading partner among EU states during the 10 months, as two-way commercial exchanges stood at 559,423 tons worth $1.18 billion to register a 23.57% and 21.18% decline in tonnage and value respectively YOY. 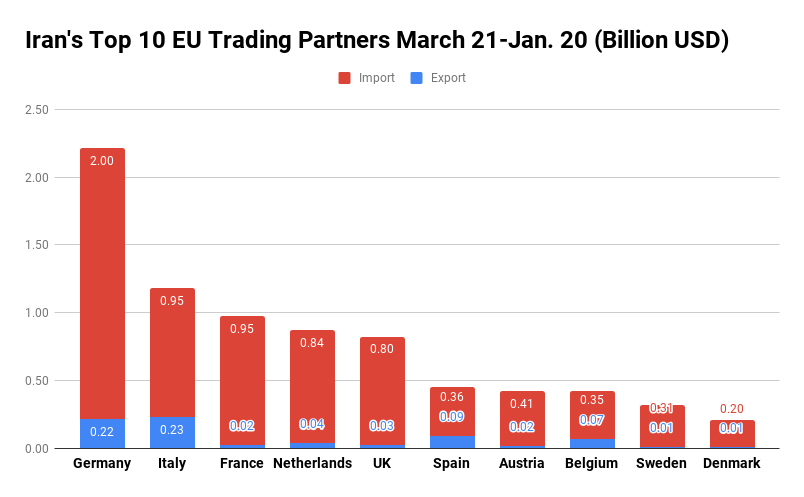 Italy was Iran’s top export destination among EU countries and 15th in the world during the period.

Iran imported 128,892 tons of commodities worth $954.66 million from Italy, down 24.78% and 20.15% in tonnage and value respectively YOY, a majority of which were air compressor screw, industrial furnace parts and baking machinery.

Italy was the second exporter of goods to Iran among EU states and ninth exporter to Iran in the world.

France was Iran’s third major trading partner among the states.

Spain was Iran’s third biggest export destination, after Italy and Germany, among EU states and 30th in the world, as Iran exported 35,613 tons worth $93.66 million to Spain during the 10-month period, down by 72.88% and 28.48% in tonnage and value respectively YOY.

The above data have been derived from the Islamic Republic of Iran Customs Administration's report and only include non-oil commodities.

A more comprehensive report is often published by Eurostat in Europe, which covers the entire list of goods exchanges.

The Eurostat report is published on a monthly basis. However, the report detailing two-way trade for the entire 2018 has been delayed due to technicalities.

Financial Tribune will publish the European data as soon as the problem is solved.

Special Trade Channel in the Making

Iran-EU trade began to increase following the signing of the nuclear agreement between Tehran and world powers in 2015 and its implementation in early 2016.

The nuclear deal, better known as Joint Comprehensive Plan of Action, saw years of international sanctions against the Islamic Republic lifted. In exchange, the country agreed to limit the scope of its nuclear program.

However, the United States under the presidency of Donald Trump, decided to unilaterally pull out of JCPOA in May last year. What ensued in the following months were the reimposition of "toughest sanctions ever", as Washington branded them.

The renewed sanctions have effectively restricted Iran's trade with the world.

Meanwhile, Iran and the EU are working to operationalize a special channel for trading commodities (mainly oil from Iran in exchange for essential goods from the EU) despite US sanctions.

Last month, Germany, France and Britain launched a mechanism to continue the flow of goods they believe is central to keeping JCPOA alive.

The Europeans conceived ISTEX, a payment system, to conduct non-dollar trade with Iran and circumvent US sanctions against banks and businesses doing business with the Islamic Republic, according to a report by NDR, a German public channel.

According to German-language business newspaper Handelsblatt, INSTEX, which stands for Instrument in Support of Trade Exchanges, is the system that analysts have been expecting. It is basically a barter system that tallies exports of Iranian oil against goods from Europe, thus avoiding exposure to the dollar, which is at the heart of sanctions against Iran. Importantly, the vehicle only allows agricultural and humanitarian goods, medicines and medical devices.

That in itself isn't much, according to Sascha Lohmann, an expert on US foreign policy at SWP, a Berlin think tank. He stressed that it's important for the EU and European unity.

“It also sends a signal to Iranians that the EU is still engaged,” Lohmann said. “Trump will probably be angry; it’s going to be interesting to see how he responds.”