EghtesadOnline: Iran stock market has had a stellar performance in the first half of the current financial year that began in March. The flow of liquidity from small investors struggling to persevere their assets in the face of a depreciating rial, has been the highlight of the equity market's success and the main driving force behinds its rally this time.

According to a report by the Securities & Exchange News Agency, the largest flow of capital into the market in H1 occurred in the third month of summer (August 22-September 22), with petrochemical and metal stocks being the most popular with investors.

Economic pundits and relevant officials have been pleading for the promotion of the stock market in order to turn it into a vehicle for financing big enterprises and keeping the ailing banking system only for microcredit needs.

According to SENA, the presence of real investors in the market was so bold that during the 61 trading days this summer stock purchases were largely in favor of small, real investors versus the big players, Financial Tribune reported.

By Sep. 12, Tehran Stock Exchange's main index, TEDPIX, had broken seven milestones and reached the 155,000 point.  That day saw the best performance for small investors, on whose heels, TEDPIX leapt by 4,880 points. 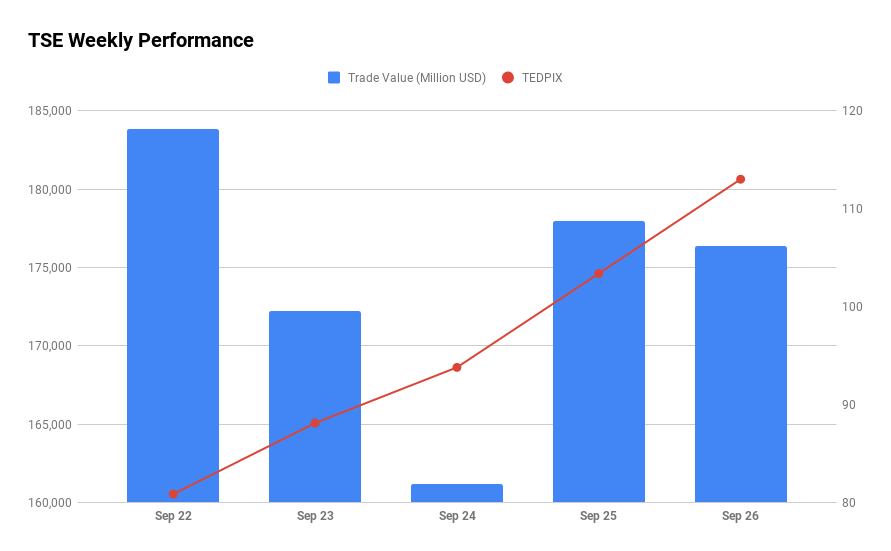 The return on investment for petrochemical stocks from the start of the year unil the end of summer has been around 83%. The petrochemical industry has particularly benefited from the rial's steep decline.

The industry got a second lease on life when the government finally decided to lift the price cap on petrochemical products on Iran Mercantile Exchange. The second most popular stocks were base metals, with small investors buying 150.4 trillion rials ($) worth of stocks during the period.

The past week which marked the first days of the fall  saw the benchmark indexes of both the TSE and the junior market Fara Bourse cross new thresholds. The TSE ended the week at 180,636 points, taking the market's ROI's to more than 15% during the week. Fara Bourse also closed at 2,071 points, bringing its ROU from the start of the year to 88.9%.

According to SENA, the most important news affecting the stock market during the past week has been President Hassan Rouhani's interview with NBC channel, his meeting with the IMF managing director Christine Lagarde and the announcement by Oil Minister Bijan Zangeneh that crude oil would be offered on the stock market.

Rouhani, in New York for the annual UN General Assembly session, accused the US of adopting a hostile stance toward Iran and turning its back on diplomacy after its unilateral withdrawal from a nuclear agreement between Iran and the six world powers.

"Naturally, if someone is keen on having a meeting and holding dialogue and creating progress in relations, that person would not use the tool of sanctions and threats [and bring] to bear all of its power against another government and nation," Rouhani said. "That means that the necessary willpower is absent in order to resolve outstanding issues."

They “discussed global developments and economic challenges facing Iran, as well as the key reform priorities needed to safeguard macroeconomic stability at this time,” Lagarde said.

According to the president’s website, Rouhani told Lagarde that Tehran is willing to expand relations with financial institutions, especially the IMF, and benefit from the fund’s advisory arm.

The president stressed that IMF’s primary responsibility is to protect its members against unlawful invasion and banking and monetary sanctions.