U.S. Stocks Start May Lower, With Eyes on Apple

EghtesadOnline: U.S. stocks opened lower on a day when much attention will be focused on Apple Inc.’s earnings report after the close. The dollar extended its rally, while U.K. equities climbed during a lackluster session in which many major markets were closed.

The S&P 500 Index declined Tuesday morning, pulled lower by financials and energy stocks. Ten-year Treasury yields held below 3 percent as the greenback headed for its ninth gain in 11 days, with that strength weighing on most commodities, Bloomberg reported.

The dollar got a boost from weakness across European currencies. Sterling slumped after U.K. manufacturing slowed more than predicted. That spurred the FTSE, one of the few European equity gauges trading, to rise a fourth day.

For all the interest in company earnings, another big focus this week is likely to be central bank policy and economic data. Investors will watch the Federal Reserve meeting closely for any signals that policy makers will raise interest rates another three times this year. With the dollar ticking higher, foreign-exchange traders are also asking whether the U.S. currency’s bout of strength has legs or will fade as sellers emerge at key technical levels. 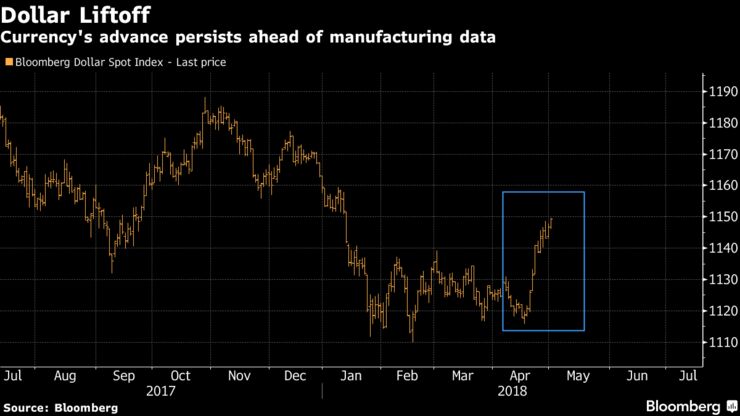 These are some key events to watch this week: