EghtesadOnline: The anxiety that gripped the aluminum market over the past month is quickly disappearing.

After roiling markets with tough rhetoric on sanctions against Russian aluminum giant United Co. Rusal and tariffs on imported metal, the message from U.S. officials is now turning softer, easing concerns about supply disruptions. Metals markets were steady on Tuesday and aluminum prices were little changed, according to Bloomberg.

“There seems to be a pattern emerging where Trump makes a big announcement, and then over the following weeks things are rolled back,” Caroline Bain, chief commodities economist at Capital Economics, said by phone from London. “It’s a businessman’s approach, where you make the biggest threat possible, and then use that as a starting point to negotiate." 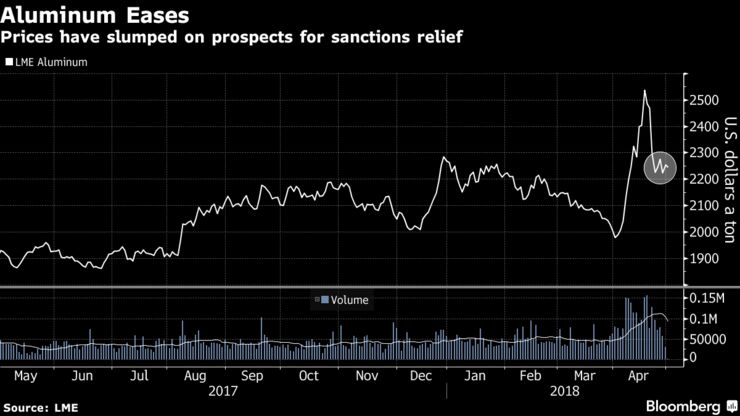 In a Bloomberg Television interview on Monday, U.S. Treasury Secretary

Steven Mnuchin struck a conciliatory tone on the possibility of lifting sanctions on Rusal. Mnuchin said discussions with Rusal have been encouraging.

At the same time, fears over global trade tensions are easing. The U.S. said it would delay import tariffs on steel and aluminum from key allies, including the European Union, Canada and Mexico, until June 1. Traders are speculating that further concessions could be made as Mnuchin and other senior officials hold trade talks in Beijing this week.

While Mnuchin refused to comment on the specifics of the negotiations with Rusal, he said the “first aspect” in the talks would be for Oleg Deripaska to reduce his stake. Last week, Deripaska offered concessions to the U.S., which included cutting his holding in En+ Group Plc, the holding company through which he controls Rusal.

While it’s still unclear who would buy Deripaska’s stake, analysts say it’s likely that some deal will be reached that would avoid supply shocks in the aluminum market.

Capital Economics expects aluminum prices to retreat towards $2,000 a metric ton by the end of the year. Prices spiked to a seven-year high of $2,718 in the wake of the sanctions, but slumped back below $2,200 last week as the Treasury softened its stance.

In other metals, zinc fell 0.8 percent to $3,103 a ton, on course to close near its lowest since December. Other metals were mostly flat.