EghtesadOnline: Stocks in the U.S. rose amid a flurry of dealmaking at the start of another busy week for earnings and economic news. The dollar climbed while the pound declined as Prime Minister Theresa May lost a key ally.

Apple Inc., which reports earnings Tuesday, led the charge in the S&P 500, and McDonald’s Corp. shares were on track for their best day since July after the burger chain reported solid results.

The 10-year Treasury yield held steady just below 3 percent after the U.S. Commerce Department reported a pickup in consumer spending in March and inflation hit the Federal Reserve’s 2 percent target, reinforcing the outlook for further interest-rate hikes. Company results and economic numbers, including U.S. employment figures, will continue to roll in this week, while monetary policy and benchmark yields will remain a major focus as the Fed meets for its next interest rate decision. 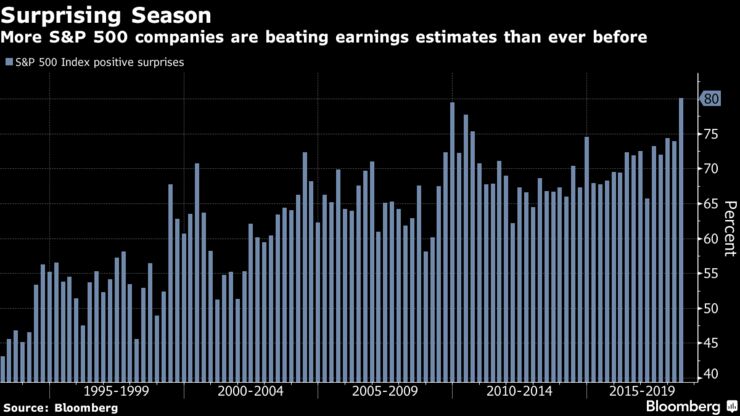 The Stoxx Europe 600 Index retreated from earlier gains, with consumer and health-care companies leading advancers, while energy and raw materials shares were among the big decliners. Shares in the FTSE 100 Index climbed to the highest in almost three months, with retailer J Sainsbury Plc jumping the most on record as it plans to buy Walmart Inc.’s U.K. arm, Asda. The pound dropped after Amber Rudd quit as U.K. home secretary and Housing Secretary Sajid Javid was named her replacement.

Elsewhere, oil fluctuated while Bitcoin gained and gold fell. Equities in Seoul advanced with the won after North Korea pledged denuclearization on Friday ahead of the upcoming summit between Kim Jong Un and U.S. President Donald Trump.

These are some key events to watch this week:

Pound Theresa May Dollar US stocks