EghtesadOnline: U.S. stocks stumbled into the weekend, as renewed selling in technology shares overshadowed what has so far been a solid earnings season. Inflation concerns sent the dollar higher and Treasury yields topped 2.95 percent.

Major American equity benchmarks fell at least 0.8 percent on Friday, paring gains from earlier in the week. Makers of computer chips and hardware bore the brunt of the selling, with Apple Inc. capping for its biggest rout since early February following a downgrade based on its deteriorating outlook in China. Trade also remains in focus, with Treasury considering an emergency law to curb Chinese investments in sensitive technologies, Bloomberg reported.

U.S. Treasury yields rose for a third session even as the stock selloff worsened. While investors debate the cause of the decline in sovereign debt, bond market gauges showed an increase in expectations for inflation after recent torrid gains in metals from aluminum to nickel. American oil bounced back from a decline sparked by Donald Trump’s complaint that prices are too high to settle above $68 a barrel.

“Interest rates are once again rising which is raising peoples’ concerns about the impact of rising rates on the U.S. economy and markets,” Brent Schutte, chief investment strategist at Northwestern Mutual Wealth Management Co., said by phone. 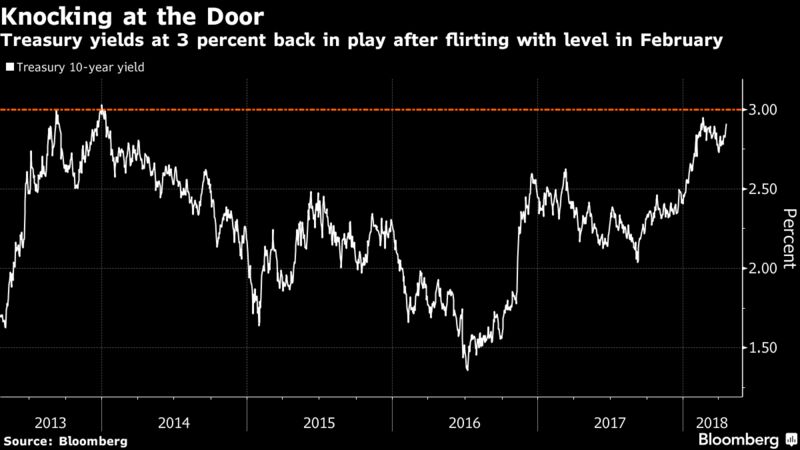 General Electric Co. rose on solid results, one of just four gainers in the Dow Jones Industrial Average. The company joined the 85 percent of S&P 500 companies that’ve topped earnings estimates so far this season by an average of 7.1 percent Alphabet Inc. reports Monday in what will be one of the busiest weeks for first-quarter results.

Still, the late-week selloff in equities damped the mood among investors looking to earnings season to break stocks out of a two-month range. While companies that have beaten estimates pushed higher, those that missed were punished far more severely. The chipmaker selloff also highlighted market risks, from a potential slowdown in global growth to the implications of the ongoing trade dust-up between the U.S. and major economies.