EghtesadOnline: U.S. stock futures rallied and bonds fell with oil as traders speculated there would be limited repercussions from the weekend’s missile strikes in Syria.

Haven assets including Treasuries and gold dropped with European debt, while the Stocks Europe 600 Index slipped as traders assessed the military action’s aftermath. The dollar weakened after futures data showed hedge funds are the most bearish on the currency in five years. WTI oil futures fell below $67 a barrel amid concern that shale production will rise further, and after there was no immediate reprisal to the missile attack. The ruble reversed earlier losses, Bloomberg reported. 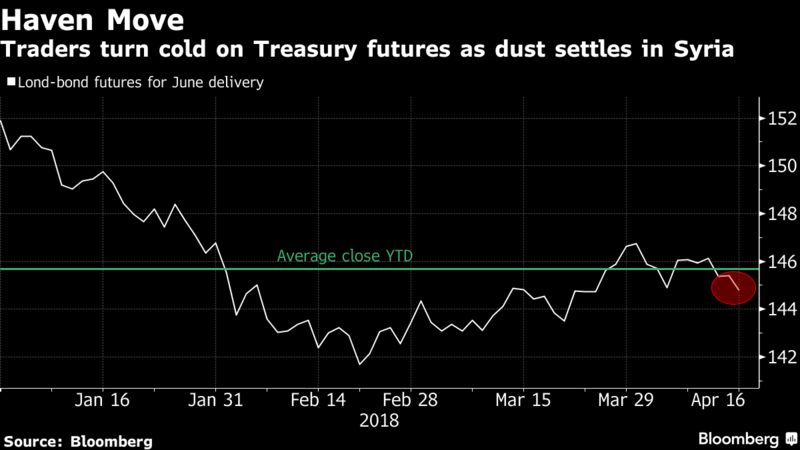 “There was a significant fear of potential escalation; that hasn’t happened so far,” said Callum Henderson, a Eurasia Group managing director in Singapore. Even so, “it remains to be seen how long this market rally lasts on the back of this specific factor -- whether or not, or when, Russia retaliates,” he said on Bloomberg Television.

U.S. President Donald Trump declared “mission accomplished” via Twitter on Saturday, a day after the U.S., France and the U.K. launched military strikes in response to Syrian leader Bashar al-Assad’s suspected chemical attack on civilians. While geopolitical concerns linger, with new U.S. sanctions on Russia, the focus this week is back on earnings season in the U.S. and a slew of Federal Reserve officials who are due to speak, including the incoming head of the New York Fed, John Williams.

Aluminum resumed its rally, adding to what was its biggest weekly increase on record Friday. The yen edged up as polls showed falling support for Japanese Prime Minister Shinzo Abe’s government.