EghtesadOnline: Stocks fluctuated in Asia and Treasuries edged higher amid a lack of fresh impetus as an easing of trade tensions paved the way for investors to turn to key U.S. inflation data due Wednesday. The dollar steadied as traders also weighed a possible U.S. military strike on Syria.

With little in the way of new catalysts, indexes from Tokyo to Sydney struggled for direction. Shares in China and Hong Kong had the biggest gains as People’s Bank of China Governor Yi Gang offered more details on pledges to open the economy. Japanese stocks fell and U.S. equity futures slipped after the S&P 500 closed higher. European equity futures declined. WTI crude drifted but held above $65 a barrel, and Brent futures slipped from their highest level in more than three years. The dollar was little changed after losses and Treasury yields ticked lower, according to Bloomberg. 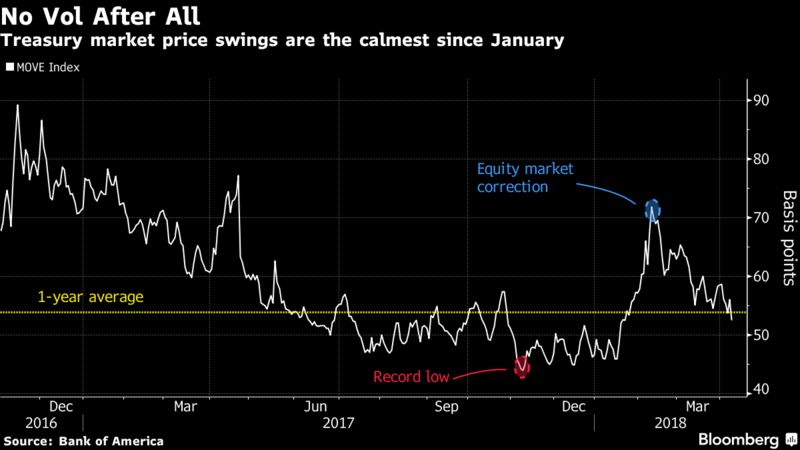 “The market is very, very fickle,” said Stephen Innes, head of trading for Asia Pacific at Oanda Corp. in Singapore. There are “so many potential risk aversion embers waiting to ignite, it’s scary: Mueller, Syria, Iran for starters, but we still have no idea how this Kim-Trump affair will play out. It’s incredibly tough to hold a view in this market, and I think this is why we see constant gyrations on risk dynamics on a daily basis.”

Investor focus has returned to the global economy and the outlook for consumer prices. China’s factory inflation slowed for a fifth month while its consumer price index retreated from a four-year high. Later this week the U.S. earnings season gets underway with bank heavyweights from JPMorgan Chase & Co. to Citigroup Inc. reporting first-quarter profits. Volatility is retreating in equity and bond markets after a shaky start to the year that’s tested assumptions of synchronized global economic growth.

On the geopolitical front, attention remains on Syria. Heavy flights of coalition aircraft were witnessed near the border with Iraq, according to al Jazeera. Meanwhile, U.S. President Donald Trump intensified preparations for a U.S. response to a suspected chemical weapons attack in the country, canceling a planned trip this weekend to South America.

Here’s what is coming up this week: