The Stoxx Europe 600 Index climbed as investors traded on earnings from companies including Credit Suisse Group AG, following a mixed session in Asia. The yen’s rise to a 15-month high weighed on Japan’s Topix index, while shares in Hong Kong and Seoul gained and those in Shanghai fluctuated before a week-long Lunar New Year holiday. Bunds advanced, along with other core European bonds, even as data showed the euro-area economy maintained its growth pace as policy makers prepare to wind down stimulus, Bloomberg reported. 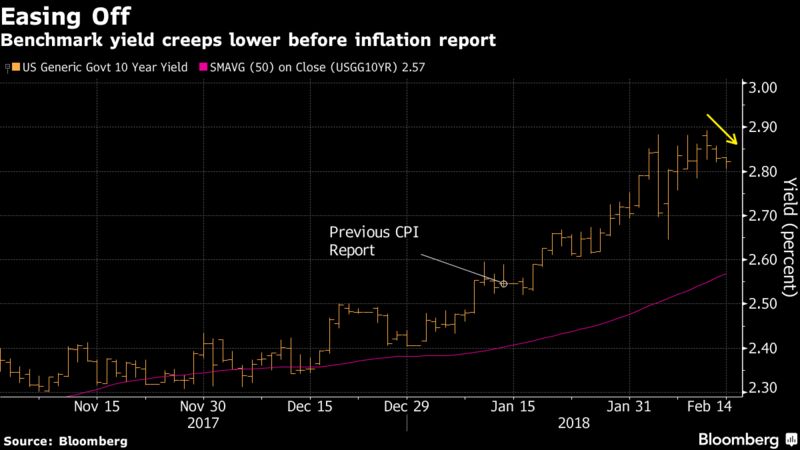 Investors’ focus is now firmly on the American consumer-price data due Wednesday that may give clues on where markets are heading after the past two weeks’ gyrations. The question is whether the outlook for inflation is strong enough to provoke a steeper trajectory of U.S. interest-rate increases. New Chairman Jerome Powell suggested the Federal Reserve would forge ahead with gradual tightening even as it keeps an eye on financial-system risks following the recent equity rout.

“Since the last payrolls about two weeks ago, inflation is the obsession of traders,” Pierre Martin, a trader at Saxo Bank in Zurich, said by phone. “Given the selloff in stocks and with a lot of brokers pushing clients to buy the dip, people are trying to position themselves ahead of the CPI figures today.”

Elsewhere, WTI crude oil drifted below $59 a barrel after its worst week in two years as fears over rising U.S. supplies curb investor optimism. South Africa’ rand headed for its strongest level against the dollar in almost three years after the ruling African National Congress said it will remove President Jacob Zuma from office tomorrow through a Parliamentary vote of no confidence.