EghtesadOnline: While oil is rebounding from its biggest weekly decline in two years, gains are still being limited by concern over a resurgence in U.S. shale output.

Futures in New York were up about 1 percent after tumbling 9.6 percent last week. Prices are near $60 a barrel after data showed last week that American drillers raised the number of rigs exploring for oil to the highest since April 2015. That’s raising fears that a gain in U.S. output will undermine OPEC’s efforts to clear a glut. Hedge funds scaled back bets on rising West Texas Intermediate crude by the most since August. 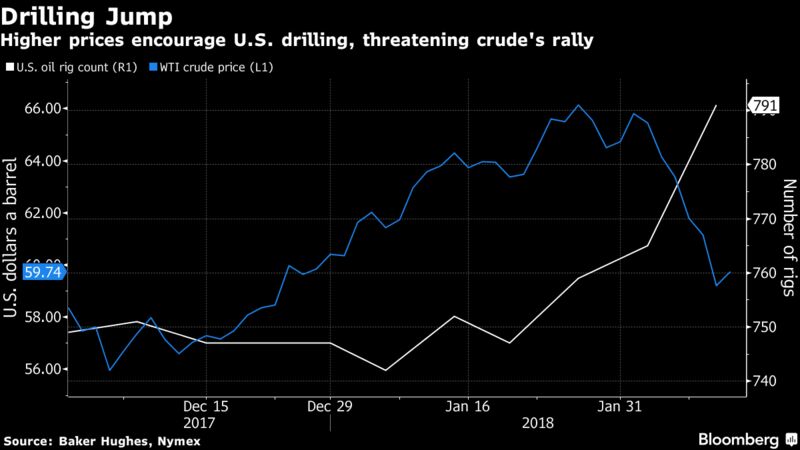 Last week’s tumble means crude has lost this year’s gains, after a global equity rout spread to commodities and as the U.S. pumps out record volumes. Meanwhile, a weaker dollar that had driven oil’s advance in January has been rebounding this month, adding to weakness in prices. American drillers remain the biggest challenge to the Organization of Petroleum Exporting Countries and its allies as they curtail output to prop up prices.

“Oil is paying the price for rising too quickly to levels that attracted increased U.S. production,” said Ric Spooner, an analyst at CMC Markets in Sydney. “Traders are also nervous about recent financial market volatility and the stronger dollar.” WTI oil could fall to “the low $50s range if volatility persists,” he said.

The U.S. oil rig count rose by 26, the most in a year, to 791 last week, Baker Hughes data showed on Friday. American weekly crude output topped 10 million barrels a day for the first time on record, and the government forecasts it will skyrocket to 11 million later this year. That means the U.S. is now a top producer of the same caliber as Saudi Arabia and Russia.

Hedge funds reduced their WTI net-long position -- the difference between bets on a price increase and wagers on a drop -- by 4.7 percent to 472,792 futures and options during the week ended Feb. 6, according to the U.S. Commodity Futures Trading Commission. Longs declined by 4.1 percent. Shorts rose for a fourth week. Total positioning shrank the most in three months.