EghtesadOnline: What’s supposed to be the most volatile asset in the universe is proving to be a bastion of stability compared with wild swings and carnage in global equities this week.

Bitcoin clawed its way back from the four-month low of $5,922 it touched on Tuesday, rebounding 53 percent to $9,069. The S&P 500 Index and the Dow Jones Industrial Average both fell more than 5 percent this week, wiping out gains for the year. Emerging markets stocks and currencies also plunged, while shorter maturity U.S. Treasuries climbed as investors fled from risky assets to safe-havens, according to Bloomberg.

Bitcoin’s supporters are quick to extol the cryptocurrency’ virtues as an asset that’s uncorrelated to the broader market -- independent from any single country, company or central bank -- which can serve as a haven in times of market turmoil. And while that turmoil can usually be found in Bitcoin prices and headlines, this week U.S. equities are beating the largest cryptocurrency on that field.

Since the drop below $6,000, Bitcoin has been on a steady climb, causing volatility measures on the digital asset to stabilize while the sell-off in the S&P 500 triggered the biggest jump on the Chicago Board Options Exchange Volatility Index ever. 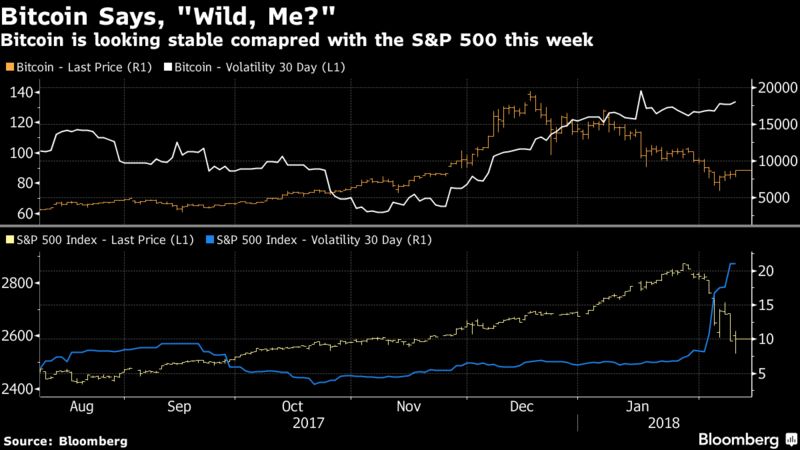 The “do no harm” approach to cryptocurrencies taken by U.S. regulators at a Senate hearing Tuesday sparked the rebound, while negative headlines from regulatory crackdowns in China and South Korea that have weighed on prices subsided.

The 70 percent slump from Bitcoin’s high of almost $20,000 has prompted finance heavy weights to say the crypto bubble had finally popped. Judging from price action this week at least, maybe those calls were premature.