What on Earth Happened to Stocks? Here's Where to Cast the Blame

EghtesadOnline: Not widely welcomed, but arguably overdue? The sharp sell-off in stocks that started last week and gathered steam this week lacked a specific trigger -- unlike the last time U.S. shares fell this much, which came in the wake of the U.S. losing its AAA sovereign rating at S&P Global Ratings in 2011.

"People are waking up shocked -- January was a very good month and suddenly you hit February and it’s all flipped," said Kerry Craig, a Melbourne-based global market strategist at JPMorgan Asset Management, which oversees about $2 trillion. "I had a flurry of emails from clients" wondering "what on Earth has happened," he said by phone.

According to Bloomberg, experts are pointing to a confluence of factors, from concerns over the path of Federal Reserve interest-rate increases to a rapid unwinding of trades predicated on continued low volatility in markets.

Longer-dated U.S. Treasuries stubbornly refused to budge much after the Fed kicked off monetary tightening in 2015. The narrative was that with a "Goldilocks" economy of growth without much inflation, long-term borrowing costs could stay low. And that was all bullish for stocks. Then yields started popping higher last month. Some warned that if 10-year yields punched through 2.6 percent, it would spell trouble for equities. They were right. 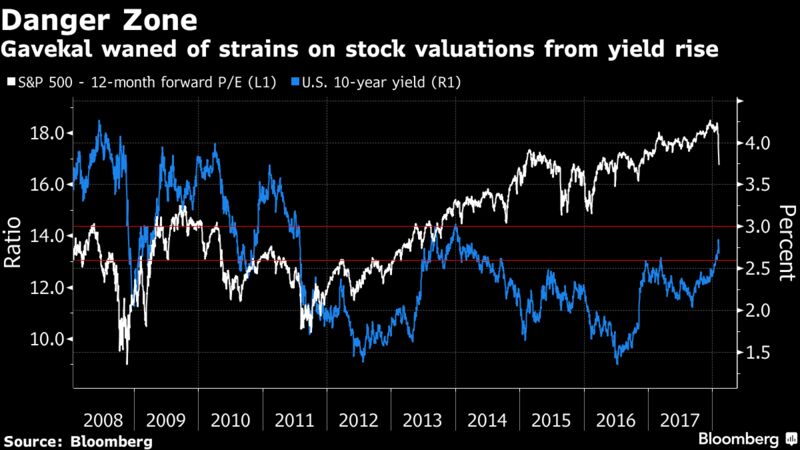 Behind the surge in yields is an increasing debate over the outlook for Fed policy. For much of the current tightening cycle, investors were comfortable with the idea that the U.S. central bank would stop raising its target rate at a much lower level than in the past -- because slower trend growth rates would hold down inflation.

Then a $1.5 trillion tax cut was enacted just as the economy expanded an average 3 percent over the last three quarters of 2017. Friday’s U.S. employment report suggested wage gains are picking up -- potentially boosting inflation. Combined with a changing of the guard in Fed leadership, it all raised the question of whether indeed policy makers would stop at around 3 percent for the upper band of the target. And it may be weeks before investors hear from the new chairman, Jerome Powell. 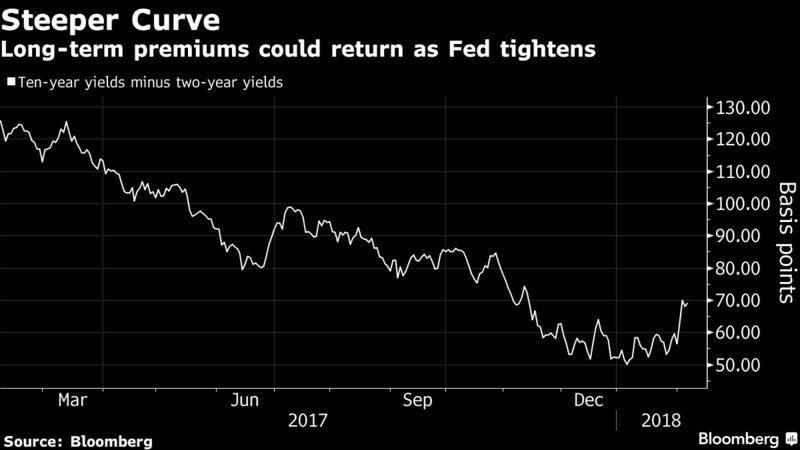 The strong start to the year in U.S. shares was the “standout” indicator that stocks were overbought in the short-term, strategists at Citigroup Inc. said on Jan. 25. The weekly relative strength index for the S&P 500 had risen to the highest on record and the strategists noted a pull-back to the current cycle’s trend-line would mean a market correction of over 20 percent. 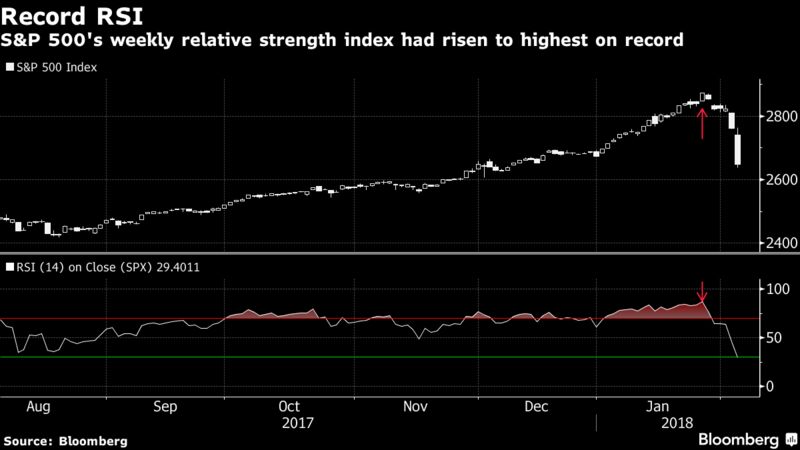 For Bank of America Merrill Lynch, it was a case of too much money being plowed into the market too quickly. A contrarian sell signal was triggered on Jan. 30, when its “Bull & Bear” indicator surged towards the red zone, thanks in part to record equity inflows. 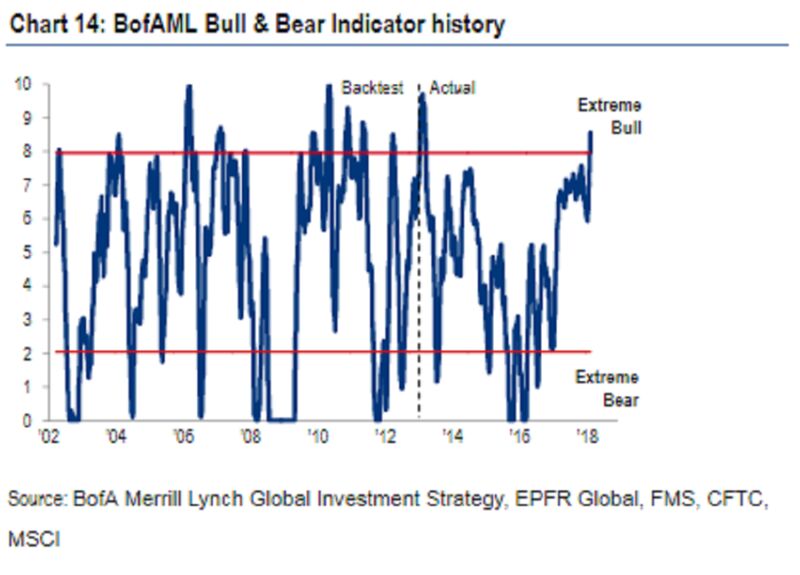 The popularity of short-volatility bets showed its ugly side Monday, as selling from trend-following strategies contributed to the mini flash crash that hit U.S. equities around 3:10 p.m. on Wall Street, according to JPMorgan Chase & Co. strategists Marko Kolanovic and Bram Kaplan. A rise in realized volatility on Friday had been significant as it was a signal for many related strategies to bail out of risk, they wrote. A continued surge will probably spur a total of $100 billion of outflows from U.S. stocks by funds following so-called systematic approaches, they estimated. 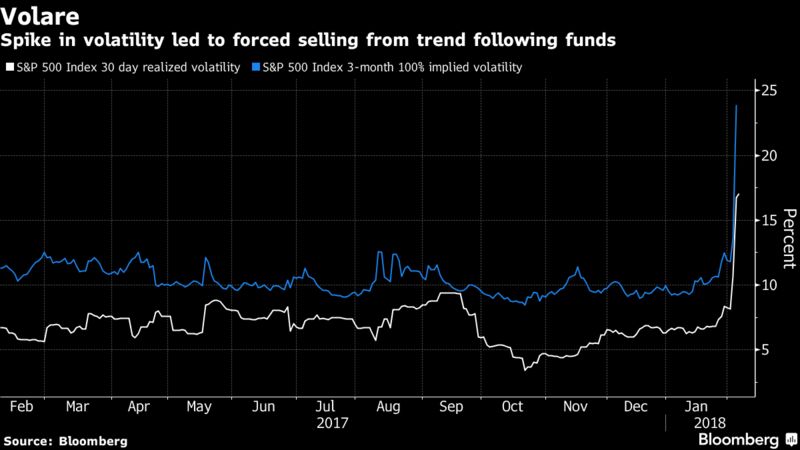 U.S. stock valuations were heading to extreme levels, even by the elevated standards of the past three decades. The Shiller P/E Ratio, a measure based on comparing prices with cyclically adjusted earnings, climbed more than two standard deviations above the average of the last century -- only for the third time, after the dot-com bubble and the roaring ’20s surge that ended with the Great Depression. 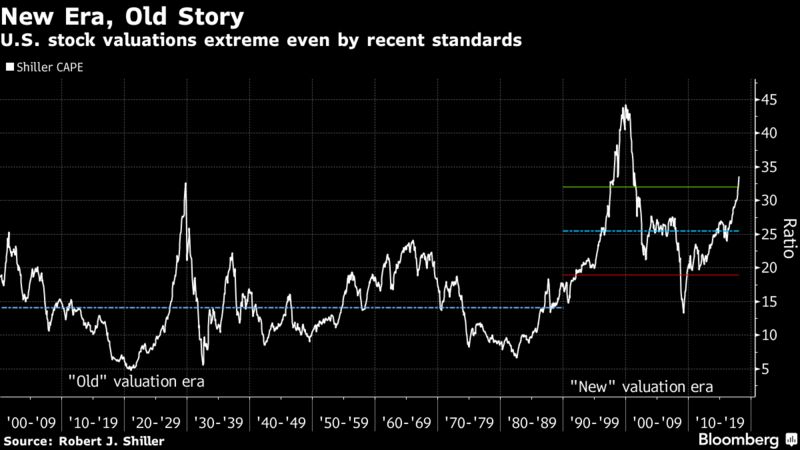