EghtesadOnline: Commodities are escaping the worst of the global market rout as losses in raw materials are capped by speculation that the bullish outlook for demand remains intact.

The Bloomberg Commodity Index pared its decline to only 0.1 percent by the end of the Asian day as gains in precious metals and U.S. natural gas helped offset lower oil and industrial metals. While some raw materials were dragged lower as investors eschew risk, the reaction was muted compared with other assets. Stock markets from Hong Kong to Tokyo tumbled more than 4 percent following Monday’s collapse in U.S. equities and bond yields, according to Bloomberg. 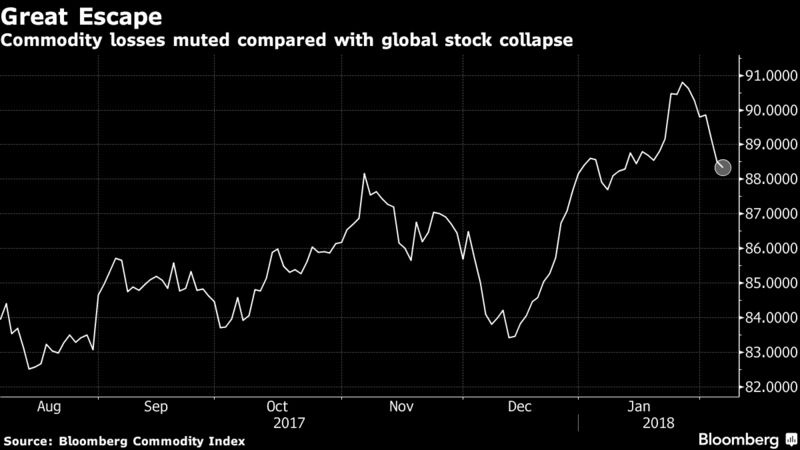 Commodities surged in January to the highest level since 2015 amid projections for the strongest global growth since 2011. Goldman Sachs Group Inc. last week said it’s the most bullish on raw materials since the end of the supercycle in 2008 as growing demand eats into stockpiles. The global equity rout doesn’t change the market fundamentals, according to banks including Australia & New Zealand Banking Group.

“Clearly there is a risk off tone in the markets that will weigh on the sector,” said Daniel Hynes, a senior commodities strategist at ANZ. “But there is no fundamental reason for this selloff to change our view of commodity markets.”

The Bloomberg Commodity Index, which measures returns on 22 basic resources from crude to copper, was little changed as of 5:50 p.m. in Singapore after earlier falling 0.4 percent. The gauge was buoyed by natural gas and agricultural commodities as well as a jump in gold futures as investors sought havens from the global stock rout. By contrast, the MSCI All Country World Index of stocks lost 1.2 percent.

Brent crude was 0.8 percent lower after earlier dropping as much as 1.2 percent. On the London Metal Exchange, copper sank 0.8 percent as aluminum, zinc, lead and nickel all declined.

For Citigroup Inc., the collapse in stock markets represents a buying opportunity.

“We recommend asset managers raise their exposure to industrial metals over the coming month, particularly at the expense of bonds and other fixed income,” the bank said in a Feb. 5 report. Citi’s case for metals rested on its analysis they do better than other assets during periods of solid growth when inflation is picking up.

The view that the broader outlook for commodities remains positive echoes remarks from billionaire bond manager Jeffrey Gundlach in January that raw materials may be one of this year’s best investments as they surge during the late phase of the economic cycle.

“The drop in U.S. equities market is currently dragging prices of commodities down,” said Will Yun, a Seoul-based commodities analyst at Hyundai Futures Corp. “However, it’d be too early to say commodities have joined the global selloff because the fundamental picture is still looking positive.”