EghtesadOnline: The Dow Jones Industrial Average tumbled 666 points in the biggest plunge since June 2016, as the worsening bond rout stirred angst that the Federal Reserve will accelerate its rate-hike schedule.

Solid jobs data that underscored the strength of the economy sent bond bulls scurrying and rattled equity investors who haven’t seen a week this bad in two years. The tandem selling accelerated after Dallas Fed President Robert Kaplan suggested officials may need to hike more than three times this year to cool the advance. The 10-year Treasury yield popped above 2.85 percent for the first time since January 2014, according to Bloomberg.

“Yields have risen, inflation evidence is rising rather broadly. It’s that combo of factors that’s starting to mount,” Jim Paulsen, chief investment strategist at Leuthold Weeden, said by phone. “And then you get a report, and that’s the straw that breaks the camel’s back, and that’s kind of what we got into today.”

There was nowhere to hide on the stock market, with all 11 S&P 500 sectors lower. The index’s five-day rout reached 3.9 percent -- marking its first pullback of at least that much in a record 404 days. Energy shares sank 4.1 percent as earnings disappointed and crude slumped. The tech selloff worsened, sending the Nasdaq 100 Index lower by 2.1 percent. Its weekly rout hit 3.7 percent, most since February 2006. Not even a record rally at Amazon.com Inc. could rescue the measure, as the world’s biggest company, Apple Inc. hit its lowest since October.

“People are finally starting to reprice reflation, it’s about time,” Jeanne Asseraf-Bitton, head of global cross-asset research at Lyxor Asset Management, said by phone. “Global economic growth is strong and corporate earnings are very solid, so there’s no reason to question the equity bull market. The rise in bond yields is good, it’s just the speed at which it’s happening that is making investors nervous. Bottom line: this is a healthy correction.” 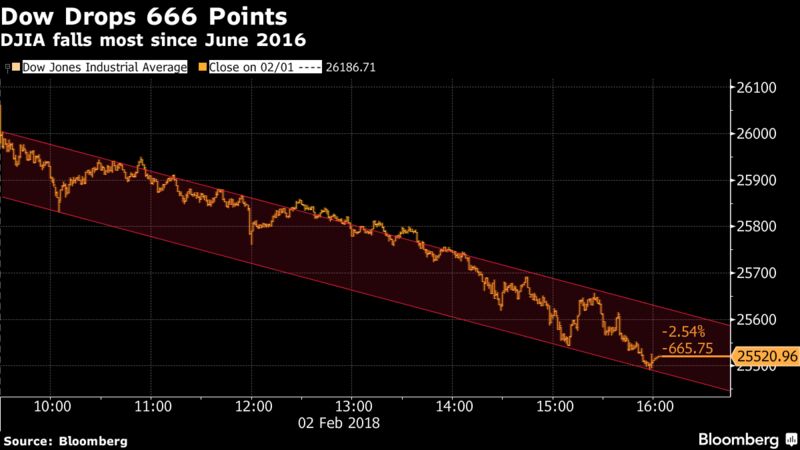 U.S. hiring picked up in January and wages rose at the fastest annual pace since the recession ended, as the economy’s steady move toward full employment extended into 2018. Equities are being tested by the surge in bond yields, with some fund managers saying 3 percent U.S. 10-year rates would signal a bond bear market. The level is seen by many stock-watchers as a potential trigger for a correction in equities.

In Europe, a bond selloff deepened across the continent, and equities dropped for a fifth straight day, the longest streak since November. Disappointing results from companies including Deutsche Bank AG and BT Group Plc. paced losses, with Germany’s DAX giving up the year’s gains, capping the worst weekly decline since 2016. Bund yields reached a fresh two-year high, while the euro and British pound weakened. Japanese debt gained and the yen declined after the Bank of Japan intervened to stem the rise in rates.