EghtesadOnline: The enthusiasm in the oil markets is breaking records. Hedge funds reported record wagers on continued price increases for both U.S. and global oil benchmarks, along with gasoline and diesel. Meanwhile, producers are hedging production at record rates as oil experiences its best January since 2006.

“There is a lot of interest in the direction of crude oil,” Rob Thummel, managing director at Tortoise Capital Advisors LLC, which handles $16 billion in energy-related assets, said by telephone. “The long oil trade continues to be the place to be.” 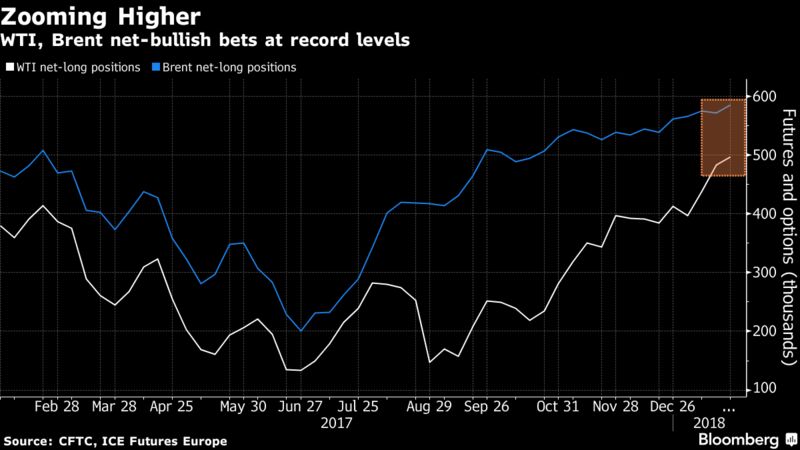 The tailwinds propelling futures to three-year highs increasingly converge: OPEC has shown unprecedented discipline in sticking to output cuts, Russia and Saudi Arabia are doubling down on their commitment to wipe out the global supply glut, U.S. stockpiles are on their longest downhill slide ever, and last week a boost from a weaker dollar was added to the mix, according to Bloomberg.

Another significant sign the oil crash is behind us, is the clear shift in the futures curve. Both in New York and London, the closer the delivery, the higher the price all the way through 2022. That pattern, known as backwardation, is typical of times when demand is rising and supplies are tightening, and it hadn’t been so marked since 2014.

At the World Economic Forum in Davos last week, Marco Dunand, the head of trading house Mercuria Energy Group Holding SA, said the crude market will remain in backwardation throughout this year with prices trading between $60 and $75 a barrel. BBL Commodities LP, one of the world’s largest oil-focused hedge funds, believes Brent crude will climb to $80 in 2018.

Also in Davos, chatter emerged from Organization of Petroleum Exporting Countries oil ministers on the favorable state of supply and demand.

OPEC Secretary-General Mohammad Barkindo said he sees the much-anticipated rebalancing of the market occurring this year, Russia’s Energy Minister Alexander Novak said that goal is almost in hand and Saudi Minister of Energy and Industry Khalid al-Falih said there are no signs of a significant slowdown in oil demand growth.

“We continue to attract people that think the rebalance is going to continue,” Gene McGillian, a market research manager at Tradition Energy in Stamford, Connecticut, said by telephone.

A weaker dollar, which has increased the appeal of commodities priced in the currency, has also added to the upward momentum in oil. The Bloomberg Dollar Spot Index has slid 3.5 percent so far this month.

“Selling begets selling and and buying begets buying,” Pavel Molchanov, an energy research analyst at Raymond James in Houston, said by telephone. “There is a momentum trade at work here. Technicals look great and there is positive sentiment.”

Hedge funds raised their West Texas Intermediate net-long position -- the difference between bets on a price increase and wagers on a drop -- by 2.9 percent to 496,111 futures and options during the week ended Jan. 23, the highest in U.S. Commodity Futures Trading Commission data going back to 2006. Longs advanced by 2.9 percent, while shorts rose 3.6 percent. Another record was the total number of bets on the U.S. benchmark.

The Brent net-long position jumped 2.4 percent to 584,707 contracts, a record-high, according to data from ICE Futures Europe. Longs added 1 percent, also to an all-time high, while shorts retreated 12 percent. 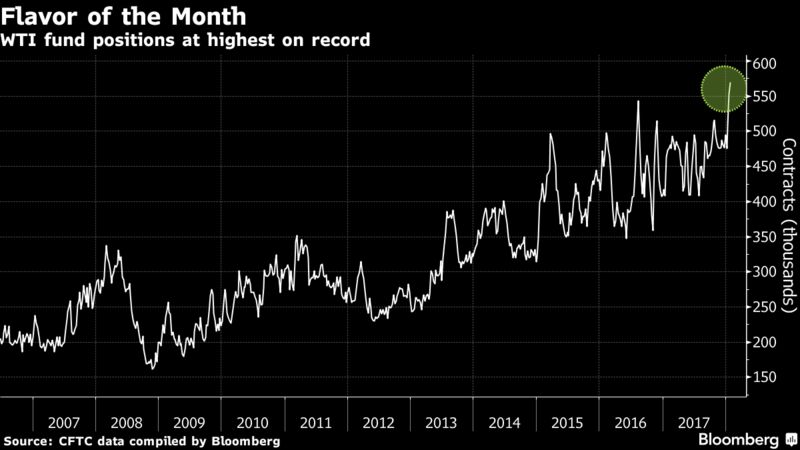 The net-short position of swap dealers, an indication of hedging, increased for a 15th week to a new high, according to the CFTC data released Friday.

In the fuel market, money managers increased their net-long position on benchmark U.S. gasoline by 13 percent to the highest on record, while the net-bullish position on diesel edged up by 3.7 percent, also to a record.

Other factors helping to propel the U.S. benchmark 9.5 percent this month and attract money managers: the surprise of the price rise itself.

“Not only is it moving, but the consensus was not wildly bullish,” upon entering 2018, Bill O’Grady, chief market strategist at Confluence Investment Management in St. Louis, said by telephone. “Most analysts were neutral to a little bit negative on oil prices for the year.”