EghtesadOnline: The dollar’s miserable week continued, with the greenback slipping against most major peers as traders digest the latest comments from White House officials. The euro was steady before the first ECB policy decision of the year, while stocks were mixed and crude gained.

U.S. Treasury Secretary Steven Mnuchin expanded on his remarks about the dollar from a day earlier, saying he isn’t concerned about short-term fluctuations and there are economic pros and cons to where the exchange rate now is. As the currency slipped, the euro held steady before the central bank decision and after data showed improving business confidence in Germany. Stocks in the region were mixed following declines in Asia, where Japanese shares fell as the yen traded at the strongest since September.

The MSCI Emerging Markets Currency Index hit the highest on record, while dollar weakness also boosted commodities. Bloomberg’s index of raw materials is at the highest since October 2015, and gold traded at about the strongest in more than a year, Bloomberg reported.

Mnuchin’s endorsement of a weaker dollar as a help to U.S. trade on Wednesday heaped more pressure on an already sliding greenback, although White House Press Secretary Sarah Sanders appeared to soften his comments later. Eyes now turn to the ECB, where traders will be looking for further clues on its plans to roll back stimulus, and its officials’ thoughts on a strengthening single currency.

Terminal users can read real-time analysis of the ECB meeting in our TOPLive blog. 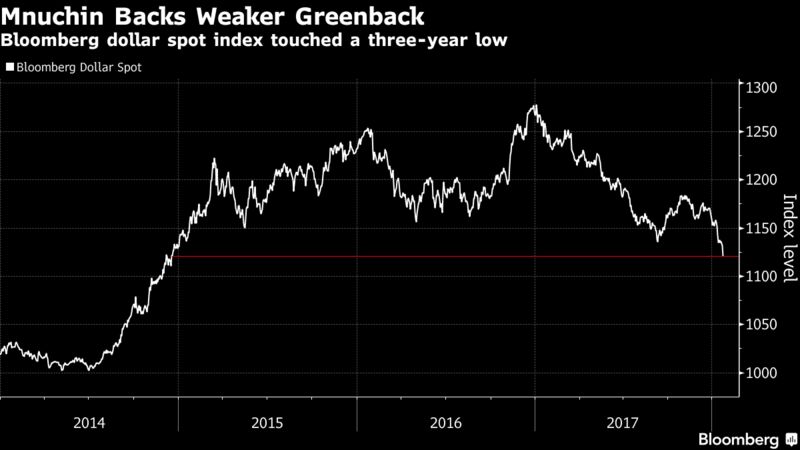 Investors are also increasingly worried about the future of global trade as President Donald Trump pushes his protectionist agenda. Commerce Secretary Wilbur Ross suggested at Davos that the U.S. could enact more levies.

Elsewhere, the Brazilian real strengthened the most in eight months and the MSCI Emerging Markets Index climbed for a 10th day.