EghtesadOnline: President Donald Trump may be volatile, controversial and prone to counterproductive fits of spontaneous self-expression. So far, though, the top decision-makers in commerce admit he hasn’t been bad for business.

They’re just not convinced it can last.

As much as they’re exuberant about soaring equities and booming economies, many global executives congregating in Davos, Switzerland are counting the risks that could bring the party to an end. Stocks rose worldwide on Tuesday even as Trump slapped tariffs on solar panels and washing machines that some warn is a harbinger of a wave of protectionism, Bloomberg reported.

“I was much more nervous a year ago,” Gary Pinkus, the managing partner for North America at management consultancy McKinsey & Co., said in an interview at the Alpine resort. Pinkus described the mood at a dinner he’d just hosted for corporate leaders as, “from an economic point of view, just shy of jubilant.”

It wasn’t long before he added a caveat: “Optimism builds slowly, but it ends quickly."

Business leaders have as many reasons to rejoice as they do to worry. The International Monetary Fund this week predicted global growth will accelerate to the fastest pace in seven years as U.S. tax cuts encourage businesses to invest while, in the same breath, warning governments to be on guard for the next recession.

Executives gathered at Davos also oscillated between optimism and caution. Take the reduction in U.S. corporate taxes to 21 percent from 35 percent that Trump pushed through last month. It’s already prompted companies including Apple Inc. to repatriate overseas cash holdings and increase U.S. investment, even as critics warn the law will exacerbate inequality by delivering most of its benefits to the already-rich.

“There are companies all around the world now looking at U.S., saying this is the place to be in the developed world," said Blackstone Group LP Chief Executive Officer Stephen Schwarzman, who advised Trump on economic policy after his election.

Tidjane Thiam, chief executive of Credit Suisse Group AG, has also noted “a step up in interest” in the U.S., citing Ferrero SpA’s acquisition of Nestle SA’s American chocolate business as an example.

Yet the boon from the tax changes may be short-lived, according to other VIPs gearing up to hear what Trump has to say when he addresses the forum at the end of the week, almost certainly to tout his “America First” stance on domestic and foreign policies.

“The tone that I sense here is that it is a bit of the world against the U.S. right now,” said Raymond Nolte, the New York-based chief investment officer of Skybridge Capital. "I don’t think the rest of the world, and to some degree some of America, know what to make of Trump or how to negotiate with him. He’s just such a wildcard that it makes trying to figure him out extremely difficult.”

The U.S. dropped out of the top 10 countries in Bloomberg’s Global Innovation Index for the first time this year. Meanwhile, public trust in the U.S. is collapsing, according to a global survey by public-relations firm Edelman, with the world’s largest economy placing dead last in a 28-country index of educated elites’ trust levels in institutions.

Trump, the first U.S. president to attend the summit since Bill Clinton in 2000, is a deeply polarizing figure among the Davos set, a strident critic of a trade-led global order that most genuinely believe is the surest route to international prosperity. The forum’s program is packed with earnest discussions of global challenges that Trump has ignored or visibly scorned, from encouraging collaboration to fight antibiotic-resistant infections to taking steps to slow climate change.

“When it was announced that President Trump was coming I think jaws dropped because this wasn’t seen as his crowd,” said David Rubenstein, co-founder of the Carlyle Group. “This is seen as the center of the globalization movement and he hasn’t been seen as the biggest supporter of globalization.”

Rubenstein said Trump could either use his Davos speech to double-down on his arguments that globalization has hurt Americans, or claim he’s been misinterpreted and that he actually supports internationalism.

One imminent test is the future of the North American Free Trade Agreement Trump is threatening to end. Canadian Prime Minister Justin Trudeau used a late-day speech on Tuesday to announce the conclusion of talks on a new Pacific free trade deal that may help reduce Canada’s reliance on its southern neighbor and largest export market. Trump pulled the U.S. out of negotiations for the Trans-Pacific Partnership immediately after taking office.  India’s Prime Minister Narendra Modi also warned against protectionism and isolation during his Davos address.

NAFTA’s fate is one of dozens of uncertainties without which, some business leaders believe, a fundamentally strong global economy could be doing even better.

“Imagine what the economy could do without this,” KPMG International chairman Bill Thomas said in Davos. “What uncertainty does is, it makes people sit on their money.” 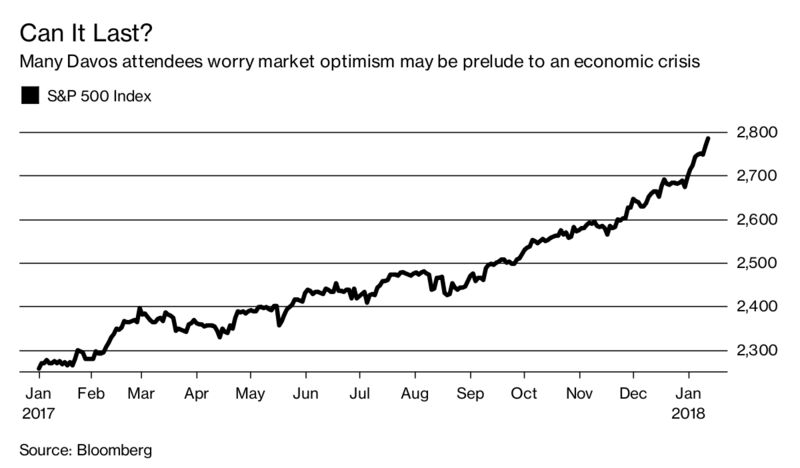 Lurking beneath the optimism among the Davos crowd is a palpable anxiety. Many attendees suggested the benign mood could be a misleading prelude to an economic crisis that could follow a truly destabilizing turn in world affairs or sudden pickup in interest rates.

“I do feel it’s a little bit like 2006,” said Barclays Plc CEO Jes Staley, among the Wall Street executives warning the prevailing boom shares uncomfortable similarities with the frothy markets that preceded the 2008 global economic crisis.

In the shorter term, the practical risks of dealing with a president as unconventional as Trump are also top of mind for executives. At one panel, Microsoft Corp. president and chief legal officer Brad Smith was asked how companies can prepare for the possibility of being attacked in an early-morning presidential tweet -- something that hasn’t yet befallen the Redmond, Washington-based software giant.

The best strategy, Smith argued, would be to engage with whatever issues Trump raises, but also not to panic too much. After all, he said, “there’ll be another one 20 seconds later.”