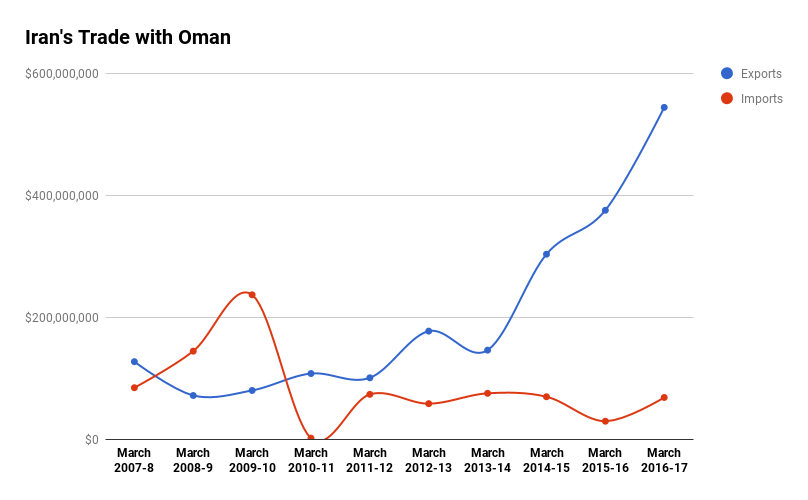 “Iran is no longer just a market of its nearly 80-million-strong population; it should be seen as a market of more than 300 million people thanks to its location, allowing access to Arab states in the south and west; Central Asia in the north; and Afghanistan and Pakistan in the east,” said Nasima Al Balushi, Ithraa’s director general for Investment Promotion & Export Development.

According to Financial Tribune, Iran’s middle to upper classes could potentially be a key market for Omani non-oil exporters. Research conducted by emerging markets research specialists, On Device Research, suggests 73% of Iranian consumers are interested in buying foreign products, as soon as they become available. What interests Iranian consumers the most is the opportunity to have access to better quality products.

Emad Al Shukaily, director general of Oman’s Economic Cooperation Office in Bandar Abbas, said, “While the oil and gas sector gets much of the attention, Iran’s diversified economy is attracting companies across industries. It is the world’s largest exporter of cement, as well as pistachios, saffron and caviar. Shipping is another big earner. In particular, Iran’s nearly 80 million young, educated and urbanized population offer Omani non-oil exporters some very exciting opportunities.”

Business commentators expect Iran to upgrade its rail network, ports and increase investment in infrastructure. Its automotive, telecoms, pharmaceutical and aerospace industries will also be looking to expand, while on the services side there is also potential for Omani business in retail, professional services and tourism.

“Iran is home to an almost unlimited range of opportunities for Omani exporters,” concluded Al Shukaily.

Iran imported an average of $62 million worth of commodities per annum from Oman during the past six years. The Islamic Republic’s exports to the tiny Persian Gulf country, on the other hand, have been more substantial with a general uptrend over the years. The exports reached a high of $544 million in the last fiscal year (March 2016-17), up 45% year-on-year. Nonetheless, Iran’s share of Oman’s total imports remains meager.

According to Maryam Khazaei, Tehran Chamber of Commerce, Industries, Mines and Agriculture’s deputy for economic studies, Oman’s imports in 2016 stood at $23 billion, of which Iran only had a small share of 3%.

According to Secretary-General of Iran-Oman Chamber of Commerce Anahita Farzam, Iran’s top exports to Oman mainly include fruits and vegetables, bread, dairy products, eggs, raw meat, livestock and iron, while it imports oil products and cars (reexported from other countries) from the neighboring country.

Notably, Iran exported its first consignment of wheat to Oman in June this year. The 29,630-ton shipment was sent from Imam Khomeini Port in the city of Mahshahr in the southern Khuzestan Province.

Khazaei said the future of Oman’s economy is focused on industry, transportation, logistics, tourism, fishing and mining, adding that investment in the production of petrochemicals such as polyethylene is among Oman’s macroeconomic plans.

“In the framework of Oman’s Seventh Five-Year Development Plan (2016-20), the government intends to make big changes by putting non-oil trade on top of its agenda to diversify its economy,” she said.

According to Khazaei, an analysis of Oman’s economic policies shows that the development of shipping lanes, railroads and roads is expected to expedite.

“Iranian companies’ exports of technical and engineering services to the Omani market should be considered a great business opportunity,” she said.