Bitcoin Crashes and Then Surges in Wild Weekend Action

EghtesadOnline: Bitcoin is proving that investing in digital currencies isn’t for the faint of heart. After plunging as much as 29 percent from a record high following the cancellation of a technology upgrade on Nov. 8, the largest cryptocurrency came roaring back in early trading Monday before fluctuating between gains and losses.

While multiple reasons are being cited for the price volatility, according to Bloomberg, one of the more viable is that some investors are switching to alternative coins. Bitcoin cash, an offshoot of bitcoin that includes many of the technical upgrades being debated by developers, has more than doubled in the same period. 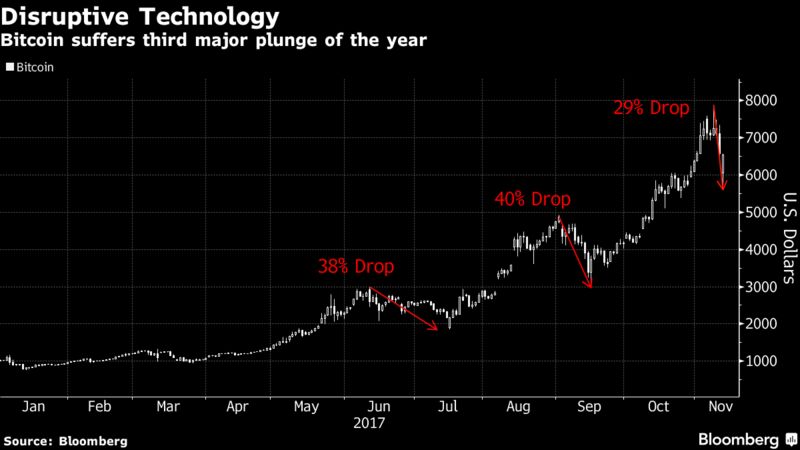 “We have seen similar steep falls in bitcoin throughout the year -- specifically in June and September -- but every time a considerable decline occurs, new investors jump in to experience the new asset class,” Hussein Sayed, chief market strategist at ForexTime Ltd., a currency broker that uses the brand FXTM, wrote in a note Monday.

While markets had been focusing on bitcoin’s more than 500 percent surge this year, bitcoin cash was gaining popularity because of its larger block size. That’s a characteristic that makes transactions cheaper and faster than the original.

When a faction of the cryptocurrency community canceled plans to increase bitcoin’s block size on Wednesday -- a move that would have created another offshoot -- some supporters of bigger blocks rallied around bitcoin cash.

The resulting volatility has been extreme even by bitcoin’s wild standards and comes amid growing interest in cryptocurrencies among regulators, banks and fund managers. While skeptics have called its rapid advance a bubble, the asset has become too big for many on Wall Street to ignore. Even after shrinking as much as $38 billion since Nov. 8, bitcoin boasts a market value of about $110 billion.

Supporters of bitcoin’s technology upgrade “are now switching support to bitcoin cash,” said Mike Kayamori, head of Tokyo-based Quoine, the world’s second most-active bitcoin exchange over the past day. “There’s a panic about what’s happening. People shouldn’t panic. Just hold on to both coins until we see how it plays out.”

The cancellation of last week’s bitcoin upgrade has left users to choose between the two versions of the cryptocurrency. On one side is the original bitcoin, powered by so-called SegWit technology, which aims to improve its performance by moving unessential data off of its underlying blockchain. On the other side is bitcoin cash, which allows its blockchain to handle eight times as much data as the original.

Proponents of bitcoin cash believe their approach is simpler and closer to the original goal of bitcoin, which was described primarily as a payment system in its white paper. Supporters of the original bitcoin say that vision is too limited, and that by improving the blockchain with SegWit technology, bitcoin can become a new digital-asset class that not only supports payments but countless other functions.

While bitcoin cash has been around for months, it saw limited support as the community awaited last week’s technology upgrade for the original bitcoin, which promised similar features. Now that the upgrade has been called off, businesses that use the cryptocurrency primarily as a payment method are expected to increase adoption of bitcoin cash.

While bitcoin cash surged over the weekend, it hasn’t been a straight line up. The cryptocurrency was trading at $1,300 at 4:45 p.m. in New York, down from a high of about $2,478 on Sunday, Coinmarketcap.com prices show.

Bitcoin has been similarly volatile; it initially rose after news that it would avoid another split, but the gains were short-lived. Its plunge earlier Monday to as low as $5,605 compares with an intraday record $7,882 on Nov. 8.