EghtesadOnline: The risk-off mood gripping global markets showed little sign of easing as European stocks followed declines in Asia. Taking impetus from a selloff in energy commodities, the slide also spread to U.S. equity futures as bonds and gold advanced with the yen and euro.

The Stoxx Europe 600 Index fell a seventh day after Japan’s Topix index retreated for a fifth session, both in their longest losing streaks in a year. S&P 500 futures fell 0.5 percent. Mining and oil-related companies set the tone, with the Bloomberg Commodities Index in its longest slide since June.  WTI crude declined through $55 a barrel after industry data showed U.S. stockpiles unexpectedly rose last week and as Russia was said to waver on extending output cuts, Bloomberg reported. 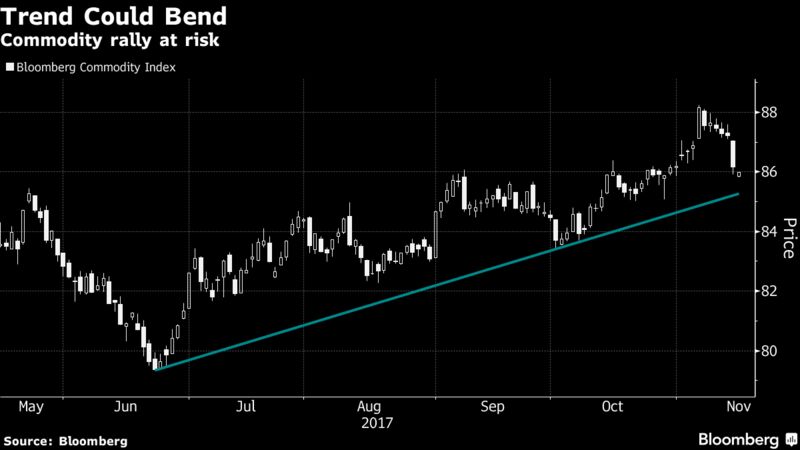 A cautious tone has swept into markets in recent days as new obstacles emerged to the U.S. overhauling taxes and after many stock gauges approached record highs. Attention now turns to data coming Wednesday on U.S. consumer prices and retail sales for clues on the strength of the world’s largest economy after the flattest American yield curve in a decade raised concern that growth will slow.

“So far we don’t see that much disruption in sentiment, so I think we are just taking a bit of froth off the top of the market at the moment,” Michael Metcalfe, global head of macro strategy at State Street Global Markets, said on Bloomberg TV. “It would be dangerous to say this is the unwinding of a bubble -- the fact that it’s being led by Japan actually tells you that, because there isn’t a valuation case to sell Japanese stocks.”

Here are some key events investors are watching this week: