Sterling retreated against all its main G-10 peers following a report that as many as 40 Conservative lawmakers have agreed to sign a letter of no confidence in May, eight short of the number required to trigger a leadership challenge. The currency’s weakness lent support to the FTSE 100 Index, but the picture was less positive across the rest of Europe and the Stoxx 600 Index dropped. Earlier, equities in Tokyo deepened a decline toward the close of the session amid a red day in Asian equities, though Chinese shares bucked the slide. Bitcoin slumped after the cancellation of a technology upgrade prompted some users to switch out of the cryptocurrency, though it pared some of the loss, Bloomberg reported. 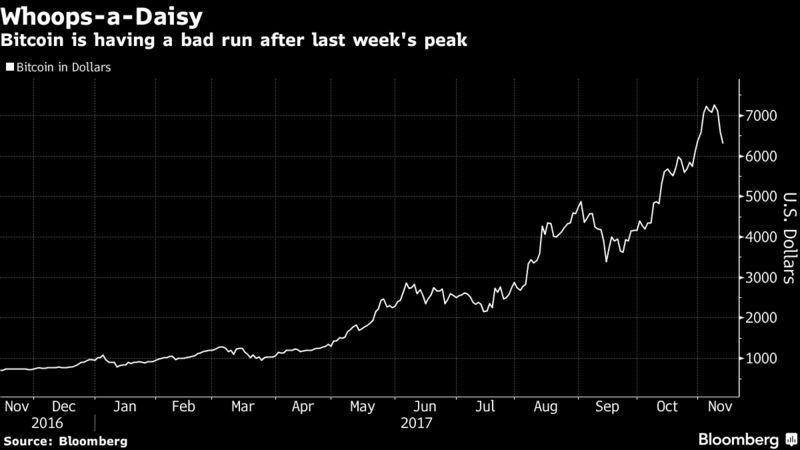 The threat to May’s leadership comes at a sensitive time for the U.K. leader. The opposition Labour Party accused her of lacking the support within her Conservative Party to deliver the Brexit transition period she’s proposed. In a week that also features a slew of Bank of England members speaking and updates on U.K. inflation, the labor market and retail sales, British assets could be in for a choppy ride.

But the U.K. data won’t be the only numbers on investors’ minds. U.S. inflation and growth numbers are also on the docket, and they could be key to the Federal Reserve’s determination to lift rates next month. Talks on tax legislation may also play into market thinking; pessimism over the likelihood of successful reforms helped drag global equities down from this month’s record high late last week. Measures of equity-market volatility have risen, albeit from low levels.

Elsewhere, gold and most industrial metals rose, and West Texas oil dropped below $57 a barrel.

Here are some key events investors are watching this week: