EghtesadOnline: Trade between Iran and Turkey stood at $8.15 billion during nine months since the beginning of 2017, according to the latest statistics released by the Turkish Statistical Institute.

The figure indicates a 14.24% rise compared to same period of the preceding year, according to numbers released by the Turkish Statistical Institute.

Iran's exports during the nine months amounted to around $5.84 billion, 75.7% more year over year. In return, Turkey exported $2.31 billion worth of goods, compared to $3.81 billion in the corresponding period of last year, indicating about 65% decline.

In September, the neighboring countries exchanged more than $899 million worth of commodities, of which Turkey accounted for about $218 million, down from $456.21 million in September 2016; and Iran accounted for the remainder $681 million,  up from $‎358.57 ‎million in the same month of last year, according to Financial Tribune. 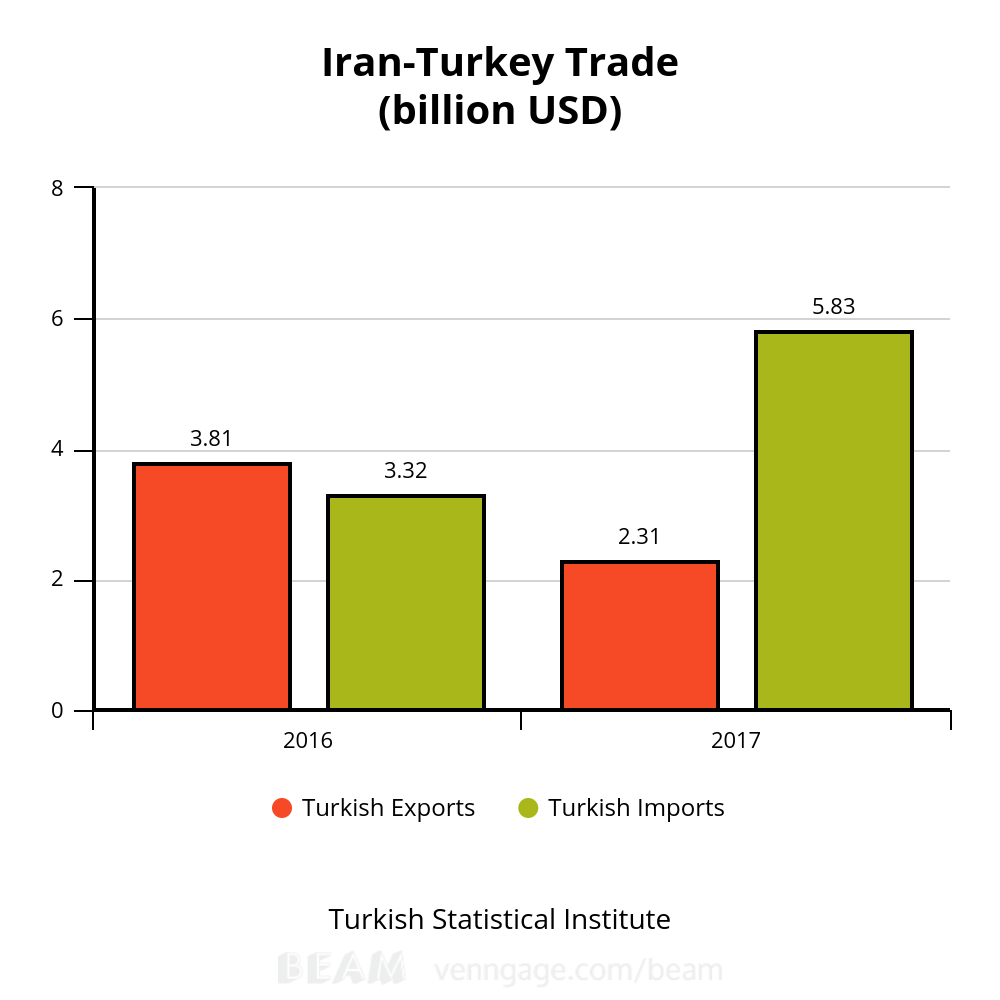 Last Iranian year, Iran exported $3.19 billion worth of commodities to the neighbor, registering a staggering 143.19% increase compared to the year before. This is while Iran’s imports from Turkey stood at $2.72 billion, going down by 1.08% year-on-year.

Iran and Turkey are signatories to a preferential trade agreement since 2014. According to the head of Iran-Turkey Studies Center and Secretary-General of the two countries’ commercial council, Jalal Ebrahimi, the two sides have 265 categories of goods under their PTA, of which Iran accounts for 140 and Turkey for 125 categories in the list.

Turkey’s Minister of Economic Affairs Nihat Zeybekçi and Iran’s Minister of Industries, Mines and Trade Mohammad Shariatmadari plan to add 60 categories of goods each to their preferential trade agreement in December, Ebrahimi told the Financial Tribune last week. The lion’s share of what Iran is going to add to the agreement is petrochemical products.

Turkey has requested to add vehicle spare parts, electric and mechanical machinery and equipment, aluminum products, iron and cast iron products, steel, construction stones, apparel and textile and cellulose products like paper, cardboard and wooden products, among other things, to the list.

Specialized commissions from the two countries affiliated with Iran’s Ministry of Industries and Turkey’s Ministry of Economic Affairs will regularly study the effect of PTA on their respective markets and add or omit goods to/from the list accordingly throughout the year. So what the ministers sign in December is open to change.

Trade between Iran and Turkey was further facilitated after the governors of the two countries’ central banks signed an agreement on October 19 to use their national currencies to do business with each other.

As per the agreement, the banks have allocated 5 billion lira ($1.4 billion) and its equivalent in rial to their respective agent banks to be used as letters of credit with a repayment period of one year for both countries’ traders

The agreement will considerably reduce the costs for both countries’ traders, as they will no longer need to use intermediate currencies since the specified agent banks are allowed to finance bilateral trading via international payment tools such as letters of credit and remittances in their local currency.

Bank Melli Iran and Turkey’s Ziraat Bank have been determined as agent banks to manage the allocated funds and issue letters of credit.

Ebrahimi told us that the move can set a precedent for Muslim countries to gradually shift to conducting trade with their own national currencies.“This can prepare the ground for the formation of an Islamic Trade Union,” he said.