EghtesadOnline: A landslide election victory for Japan Prime Minister Shinzo Abe sent the yen down and stocks in Tokyo higher, with the path paved for a continuation of loose monetary policy.

With Abe now in good political shape ahead of a pending decision on nominating the Bank of Japan’s leadership, the Japanese currency slumped to its weakest since July. The nation’s two main benchmarks extended their recent rallies that sent them to the highest in at least a decade. Elsewhere in Asia, equities swung between gains and losses. Oil extended gains after OPEC and its allies achieved record compliance to cuts in September, Bloomberg reported. 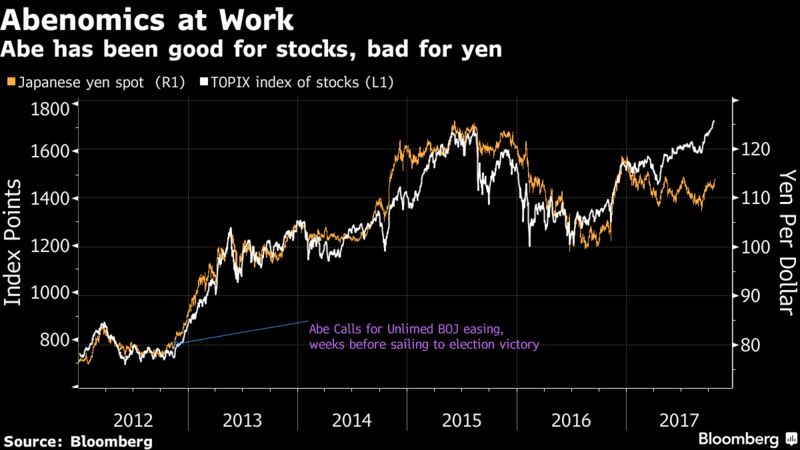 Abe’s ruling coalition retained a two-thirds majority in Japan’s lower house of parliament, polls from Sunday’s election show, bolstering his chances to become the nation’s longest-serving postwar leader. The prime minister’s Abenomics program has spurred a more-than 20 percent decline in the yen since he took office in December 2012, while the Nikkei 225 Stock Average has roughly doubled.

Investors also continue to watch the developments in Spain. Catalan separatists meet Monday to formulate their reply to Prime Minister Mariano Rajoy after the Spanish leader announced an unprecedented barrage of measures to stamp his authority on the rebel region. Rajoy on Saturday shocked many observers with plans to clear out the entire separatist administration in Barcelona and take control of key institutions including public media and the regional police force, known as the Mossos d’Esquadra.

Markets on Friday saw politics return to focus, with the dollar climbing and Treasuries sliding on bets President Donald Trump was closer to pulling off one of his biggest legislative priorities after the U.S. Senate approved a legislative vehicle for tax cuts. In the race for Federal Reserve chair, Trump said he’s considering John Taylor and Fed Governor Jerome Powell and indicated Janet Yellen remains in the running for renomination to a second four-year term.

China’s new home prices rose in 44 of 70 cities in September from the previous month, compared with 46 in August, data showed.

These some key events coming up this week: