EghtesadOnline: Oil extended gains as OPEC and its allies reiterated that all options are open to re-balance the market.

December futures increased as much as 0.8 percent in New York. OPEC and its partners including Russia achieved a record-high level of compliance to output cuts during September, according to a statement Saturday from the committee responsible for monitoring the agreement. In the U.S., drillers reduced the rig count a third week to the lowest since June, according to Baker Hughes. 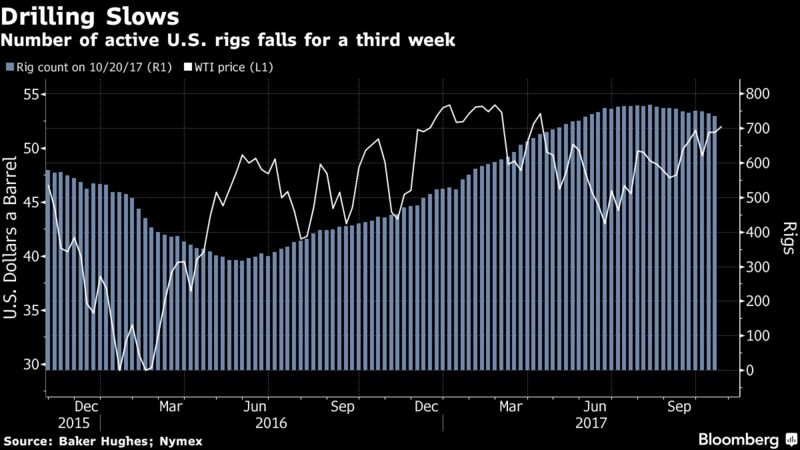 According to Bloomberg, oil is holding gains near $52 a barrel on speculation the Organization of Petroleum Exporting Countries will decide to extend supply curbs past the end of March when it meets in Vienna on Nov. 30. Geopolitical tensions in Iraq have also helped to support prices the past week, with Iraqi forces regaining control of Zummar town where Batma and Ain Zala fields are located.

“The key driver is the discussion about extending the OPEC, Russia production agreement against a background of pretty good compliance,” said Ric Spooner, an analyst at CMC Markets in Sydney. “The fact that U.S. production has not picked up noticeably in recent times is also helping. It’s possible that oil could inch a little higher, maybe up toward $54.”

West Texas Intermediate for December delivery advanced as much as 40 cents to $52.24 a barrel on the New York Mercantile Exchange, and was at $52.09 at 12:30 p.m. in Hong Kong. Total volume traded was about 48 percent below the 100-day average. The November contract expired Friday after gaining 0.4 percent to $51.47, ending the week little changed.

Brent for December settlement added as much as 30 cents, or 0.5 percent, to $58.05 a barrel on the London-based ICE Futures Europe exchange. Prices rose 1 percent last week, climbing for a second week. The global benchmark crude traded at a premium of $5.80 to WTI.

Compliance to the OPEC-led cuts was 120 percent last month, according to the Joint Ministerial Monitoring Committee. Commercial oil stocks in the Organization for Economic Cooperation and Development countries fell further in the month and now stand at 159 million barrels above their latest five-year average, the JMMC said.