EghtesadOnline: Stocks in Europe nudged higher, led by miners, as gains in oil and copper drove Bloomberg’s gauge of commodity prices to a six-month high. The euro weakened and Spanish shares fell after Spain’s government gave Catalonia a new deadline to back down from its independence claim.

The Stoxx Europe 600 Index followed gains in benchmarks from Tokyo to Sydney, with basic-resources shares reaching a four-year high. WTI crude climbed above $52 a barrel on concern tensions between Iraqi forces and Kurds will disrupt supplies, while copper surged to the highest since Aug. 2014 on speculation Chinese growth will sustain demand. The pound extended gains as British Prime Minister Theresa May headed for Brussels to intervene in deadlocked exit negotiations, Bloomberg reported. 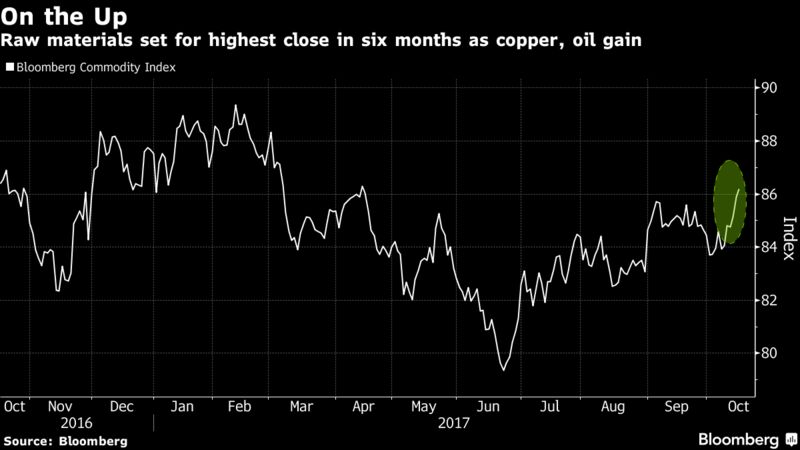 In Spain, investors are awaiting the next move in a crisis that has weighed on Spanish assets and may also roil the euro. Madrid on Monday rejected Catalan President Carles Puigdemont’s response to demands he clarify his position on independence, clearing the path for the government to suspend the region’s self-rule. Puigdemont has until 10 a.m. Thursday to back down, Deputy Prime Minister Soraya Saenz de Santamaria said.

The dollar advanced against its major G10 peers and Treasury yields rose after Federal Reserve Chair Janet Yellen said on Sunday her “best guess” is consumer prices will soon accelerate after a period of surprising softness, a forecast echoed by European Central Bank President Mario Draghi and Bank of England Governor Mark Carney. A host of Fed speakers and the publication of the Beige Book this week may provide further clues about the U.S. policy path.

Meanwhile, tension over North Korea continues to simmer. The U.S. and South Korean navies began a joint drill involving around 40 warships, amid signs North Korea is preparing for another provocation such as a missile launch. North Korea’s state-run media agency KCNA on Saturday criticized the exercise, calling it a “reckless act of war maniacs.”