Yellen Says Imprudent to Stay on Hold Until Inflation at 2%

“It would be imprudent to keep monetary policy on hold until inflation is back to 2 percent,” she said Tuesday in Cleveland. In addition, she said the Fed “should also be wary of moving too gradually.”

U.S. central bankers are monitoring progress on their 2 percent inflation goal, which they have mostly missed for the past five years. Nonetheless, the Fed’s quarterly forecasts released last week continued to show most members projecting one additional rate hike this year and three more in 2018, Bloomberg reported. 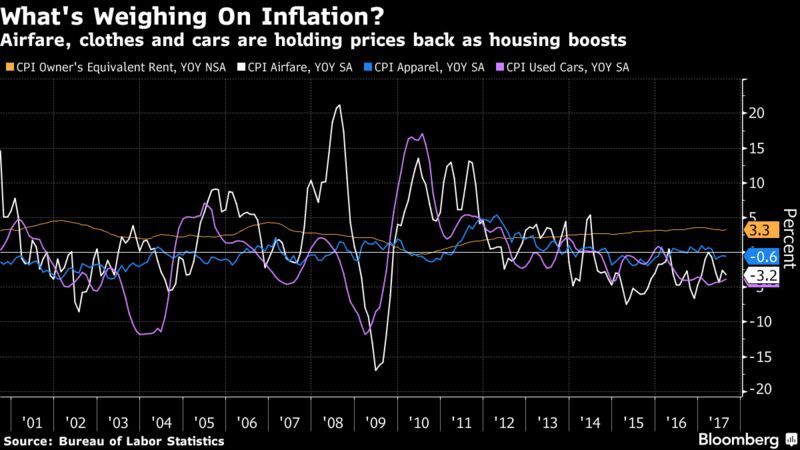 Investors in debt markets are pricing securities with the assumption that “a hike needs to be proven rather than disproven,” said Michael Hanson, chief U.S. macro strategist at TD Securities in New York. “Yellen is saying we need to have a hike disproven.”

Investors now see a roughly 70 percent probability of a hike at the Fed’s December meeting, up from 63 percent on Monday.

“Yellen sounds resolute in her dismissal of recent inflation weakness as ‘idiosyncratic’ and ‘transitory.’ She is willing to consider alternative explanations, but only hesitantly,” said Carl Riccadonna, chief U.S. economist at Bloomberg Intelligence. “Financial-stability risks are clearly a major motivating factor, as well.”

Yellen, in her most detailed speech on inflation risks this year, described three areas of uncertainty in the inflation outlook. “My colleagues and I may have misjudged the strength of the labor market, the degree to which longer-run inflation expectations are consistent with our inflation objective, or even the fundamental forces driving inflation,” she said.

Discussing each of these risks, Yellen said it’s possible that some slack in the labor market remains.

“If so, the economy could sustain a higher level of employment and output in the longer run than now anticipated -- a very beneficial outcome, albeit one that would require recalibrating monetary policy over time in order to reap those benefits and compensate for the accompanying reduction in inflationary pressures,” she said.

Yellen said the messages from survey and market measures of inflation expectations are mixed. Another risk, she added, is that there are underlying changes in firms’ and consumers’ behavior that are keeping prices low. Those forces range from foreign competition, to the growing importance of global supply chains in the production of goods, to online shopping.

Given all the uncertainties, Yellen said the policy makers will have to remain agile and be prepared to change their interest-rate assumptions.

“My colleagues and I must be ready to adjust our assessments of economic conditions and the outlook when new data warrant it,” she said.

Whatever strategy Yellen is putting forward now could be subject to change if President Donald Trump alters the leadership of the Board of Governors. Yellen’s term as chair ends in February, and Vice Chairman Stanley Fischer will depart the central bank next month.