EghtesadOnline: The dollar extended gains after Federal Reserve Chair Janet Yellen boosted expectations for an interest-rate rise in December and ahead of the U.S. president laying out his tax-reform plan. U.S. and European equity futures climbed, while most Asian stocks declined.

The Bloomberg dollar index headed for a third day of advances after Yellen said raising borrowing costs gradually is the appropriate policy stance amid uncertainty surrounding inflation. The greenback was also supported by Donald Trump’s much-anticipated framework to cut taxes. That pushed down the yen, though it didn’t stop Tokyo equities sinking as more than half of the companies on the Topix index traded without the right to receive the next dividend, Bloomberg reported. 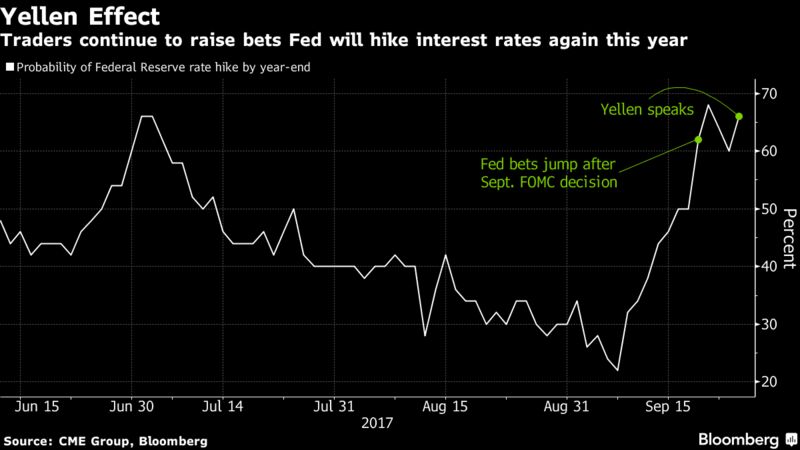 Equities are struggling to make further headway after reaching record highs earlier this month. Chances for higher U.S. rates by the end of the year rose to almost 70 percent from closer to 60 percent before Yellen’s speech as the Fed boss saw the economy strong enough to withstand tighter policy. Addresses from central bankers in Canada, the U.K. and the U.S. continue a busy week for policy setters, while geopolitical concerns linger. Escalating tensions on the Korean peninsula earlier this week saw appetite climb for the yen, Treasuries and gold, a move that’s since dissipated.

“If she wants markets to be prepared for the December hike she needs to pump up the probability of what the markets are pricing in a little bit higher yet,” Hartmut Issel, UBS Wealth Management’s head of APAC equity and credit, said on Bloomberg Television. “We can see the probabilities have moved, but probably not quite where they should be, so therefore marginally a bit of an impact yet, especially on the dollar in the short term.”

Trump and Republican leaders will announce their tax plan Wednesday, cutting rates for corporations as well as proposing a top individual income tax rate of 35 percent. They’ll leave to Congress the decision of whether to create a higher bracket for top earners. The rate on corporations would be set at 20 percent, down from the current 35 percent rate, and businesses would be allowed to immediately write off their capital expenditures for at least five years, three people familiar with the plan told Bloomberg News. More on that here.