EghtesadOnline: Stocks fluctuated near peaks and the dollar held above its recent lows with a highly anticipated Federal Reserve policy decision pending, and as investors girded for another round of geopolitical tensions after U.S. President Donald Trump threatened to annihilate North Korea.

European equity-index futures headed lower and S&P 500 Index contracts were little changed. Stock benchmarks from Tokyo to Sydney diverged. The greenback traded in a narrow range versus Group-of-10 peers and eased from a two-month high against the yen while the euro and the British pound advanced. The Mexican peso slipped after a 7.2 magnitude earthquake struck near Mexico City. Benchmark crude held below $50 a barrel and iron ore futures sunk, Bloomberg reported.

Financial markets remained largely calm as Trump’s speech to the UN did little to alter views on the tensions over North Korea’s nuclear ambitions. Absent any North Korean response, attention turns to Wednesday’s Fed decision, with a focus on plans to start shrinking the central bank’s $4.5 trillion balance sheet. 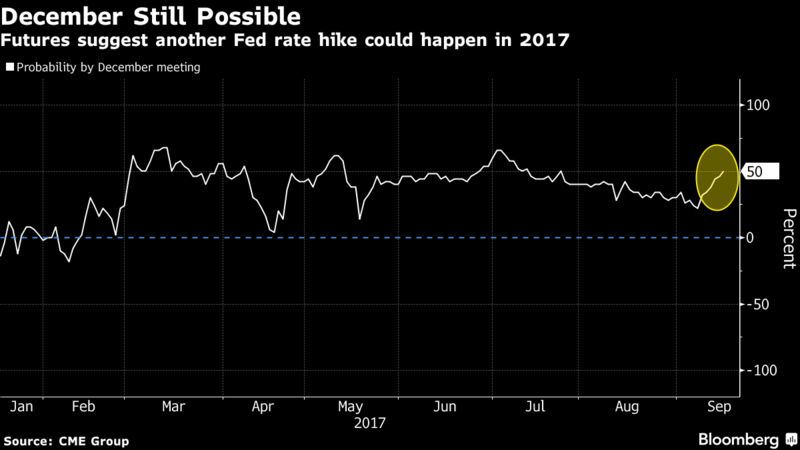 The New Zealand dollar surged, outperforming Asian currencies against the dollar, after a poll put the ruling National Party back in the lead ahead of the main opposition Labour Party ahead of this weekend’s election. The fixing of the yuan remained in focus as investors try to gauge where the People’s Bank of China wants the currency, following a set of weaker-than-expected fixings last week. The PBOC weakened its yuan fixing by the most since Sept. 12 on Wednesday.