ECB Worried About the Euro? Economists Say ‘Not So Much’

The euro has surged more than 13 percent against the dollar this year. In terms of the real exchange rate against the euro area’s major trading partners (a measure that that the ECB keeps a closer eye on)  the rise is more modest, but still a significant 5.9 percent. A sizeable part of that has come since the latest policy meeting in July.

When ECB governors meet this Thursday, President Mario Draghi is set to acknowledgethat the strong currency will be an issue ahead of talks on how and when to start winding down the extraordinary stimulus in 2018, according to a Bloomberg survey. But the new forecasts he will unveil on inflation and growth are unlikely to contain dramatic revisions, according to Bloomberg.

At first glance, the recent currency move should have a major impact on inflation in the coming years. All else being equal, models show that it could press down price growth by as much as 1 percentage point over three years. Draghi himself said back in March 2014 that “as a rule of thumb, each 10% permanent effective exchange rate appreciation lowers inflation by around 40 to 50 basis points.” More recently, the ECB’s staff gave a broadly similar estimate.

Yet, as policy makers from Jens Weidmann to Ardo Hansson have noted, the euro’s strength is most likely a consequence of the bloc’s economic health. That means falling unemployment and a closing output gap should help push inflation up, partly compensating for the currency effect.

Ahead of the new projections coming this Thursday, economists at several major banks have estimated the euro’s appreciation will shave 20 to 40 basis points from inflation in 2018-2019. Here’s a break down and excerpts from their notes: 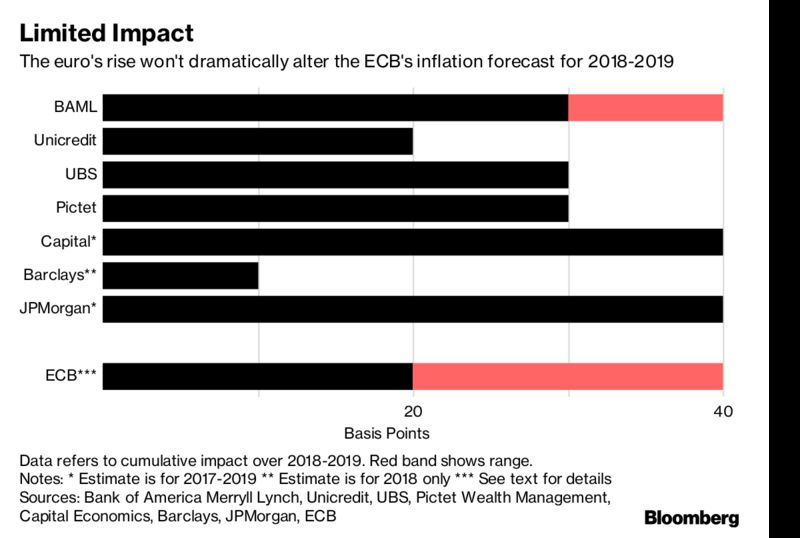