EghtesadOnline: Asian equities were mixed, the yen and gold extended gains, and Treasuries rallied as traders digested reports of North Korean plans for a ballistic missile launch on the heels of Sunday’s nuclear test.

Japanese stocks fell and equity indexes declined in Sydney and Seoul, while they fluctuated elsewhere as the United Nations Security Council met to discuss the threat from Pyongyang. S&P 500 Index futures inched lower before American markets reopen after the Labor Day holiday. Yields on Treasuries declined, according to Bloomberg.

“Markets are a little bit bifurcated,” Mizuho Bank Ltd. head of economics and strategy Vishnu Varathan told Bloomberg Television. “They do realize that the tail risks are rather large, so in fact there is an adverse outcome, they are not well prepared for it, but they are also betting against that, which is exactly why they are buying the dips.” 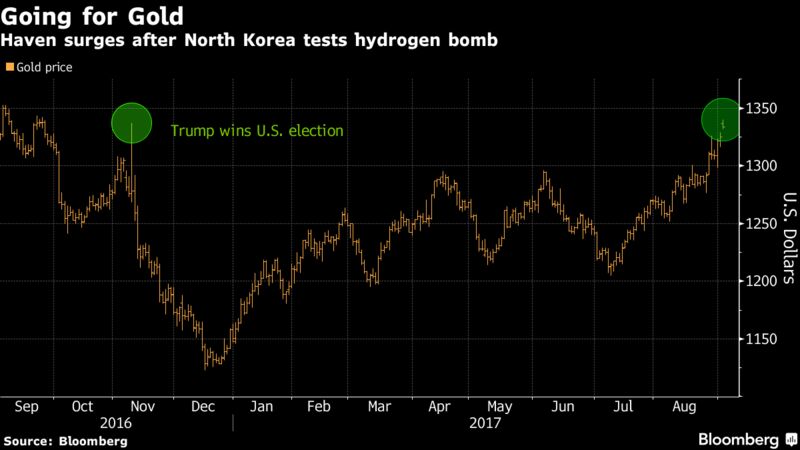 There is a high chance North Korea will fire an ICBM missile before the Sept. 9 foundation day after the Pyongyang regime started moving such a weapon, Asia Business Daily reported Tuesday, citing unidentified intelligence officials. North Korea was “begging for war” by testing a nuclear weapon over the weekend, the U.S. ambassador to the UN said. Nikki Haley demanded the strongest sanctions possible to bring the Kim Jong Un regime to heel.

Elsewhere, bitcoin tumbled the most since July after China’s central bank said initial coin offerings are illegal and asked all related fundraising activity to be halted immediately.

Among key events coming this week: