The European Central Bank president will express concern about the currency’s strength, a Bloomberg survey shows. While he declined to address the exchange rate last month at his appearance in Jackson Hole, Wyoming, 67 percent of economists said he will do just that at Thursday’s 2:30 p.m. press conference in Frankfurt. 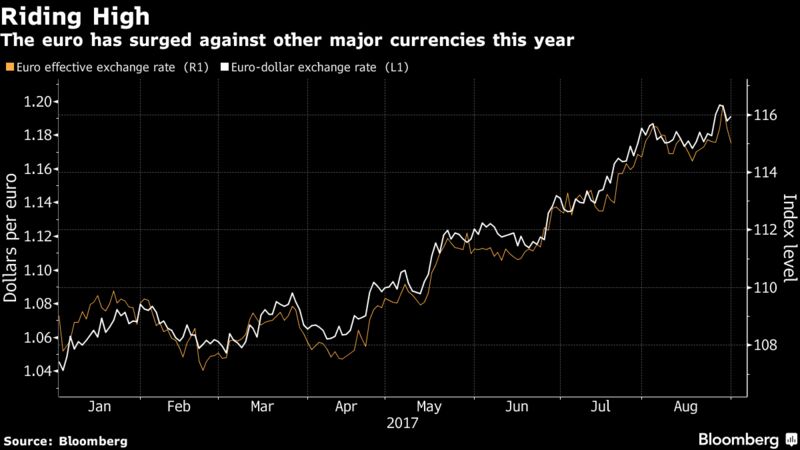 According to Bloomberg, the euro’s 13 percent surge against the dollar this year presents officials with a new challenge when they meet this week as the central bank struggles to understand why a buoyant economy has failed to generate sufficiently sustained inflation. With national central bank governors already talking at cross purposes about the currency’s gains, it will now fall on Draghi to take a stand. It traded at around $1.19 on Friday, up from $1.04 in January.

“I expect Draghi to strike a balance between calling some appreciation appropriate -- reflecting lower political risk and a stronger economy, while at the same time warning against too-sharp currency movements,” said Holger Sandte, chief European analyst at Nordea Markets in Copenhagen.

Policy makers sounded the alarm in July that the euro could strengthen too much compared with economic fundamentals, the account of the meeting showed. At the same time, Austria’s central bank governor Ewald Nowotny said on Friday there was no reason to “overinterpret or dramatize” the gains of the euro while his Estonian colleague Ardo Hansson also played down the move, saying it largely reflected the euro-area’s improving economic prospects.

Draghi has already gotten the first taste of his communication challenge when he signaled in a June speech that policy makers will need to adjust the level of accommodation as the economic recovery progresses. Those comments spurred a rally in the euro, pushing the currency past $1.20 for the first time since the ECB announced the launch of its purchase program in January 2015. 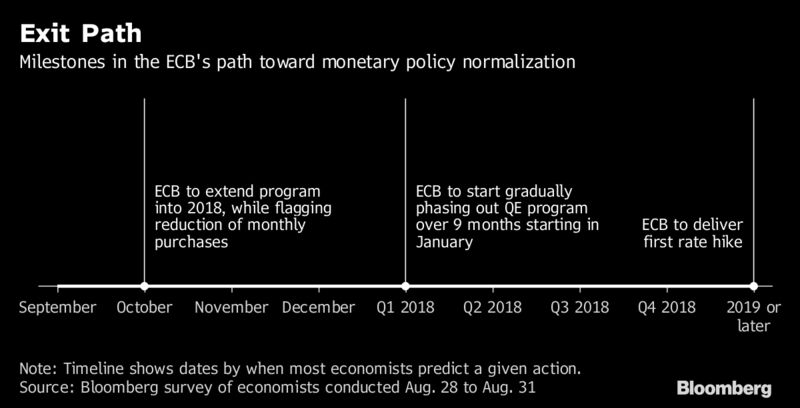 People close to the discussions said the next steps for bond purchases may not be finalized until a couple of weeks before the current program expires at the end of the year, Bloomberg reported on Friday. Economists in the Bloomberg poll expect gradual reductions in purchases over nine months starting in January, reflecting what they see as the greater importance of the flow of monthly purchases over the more than 2 trillion-euro ($2.4 trillion) stock of debt held by the ECB.

“Draghi will not specifically state that they will ‘taper’ purchases, but instead we believe the ECB will try to phrase it in such a way that they will have some flexibility over the purchase amounts,” according to Sebastiaan van Geffen, an economist at Rabobank. “The market will still see such an announcement as de facto start of tapering, though,” he added, warning that longer-term rates “should be more sensitive to a reduction in the ECB flows of purchases.” 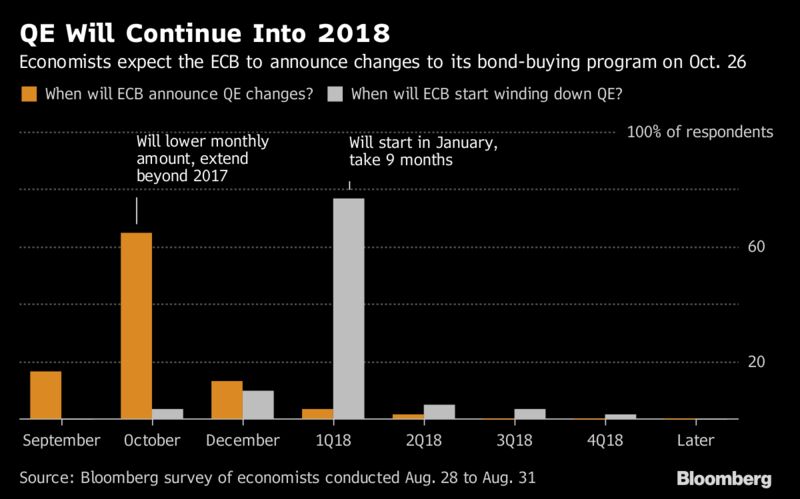 With economic momentum strong, the majority of respondents still expect the phasing out of the asset purchases until January, unchanged from the previous survey. At the same time, 77 percent of economists predict the ECB will unwind the QE by announcing reductions in the monthly purchases one step at a time, up from 65 percent previously. Most of respondents also expect the first rate increase will only happen after 2018.

“Before the ECB announces details of the intended tapering process, it should make clear that future decisions about the reduction of asset purchases will be made step by step depending on the economic outlook,” said Kristian Toedtmann, an economist at DekaBank in Frankfurt.