The MSCI Asia Pacific Index was on track for the biggest drop since the international tension flared up following Donald Trump’s “fire and fury” comment in early August. The largest declines were in Tokyo and Seoul, with more moderate reactions elsewhere in the region. The yen and the Swiss franc posted the sharpest gains among major currencies in early Asian trading. Futures on 10-year Treasuries advanced, with the cash market closed Monday for the Labor day holiday. Contracts on the S&P 500 Index fell, while gold rose.

According to Bloomberg, U.S. President Trump threatened to increase economic sanctions and halt trade with any nation doing business with Kim Jong Un’s regime, and his defense chief said the U.S. has “many military options.” North Korea said Sunday it successfully tested a hydrogen bomb with “unprecedentedly big power.” The test, the first since Trump took office, is a new hurdle for markets that have proven resilient to recent bouts of tension on the Korean peninsula. An early selloff in U.S. equity-index futures last Tuesday after North Korea’s firing of a missile over Japan was erased by the close of cash trading. 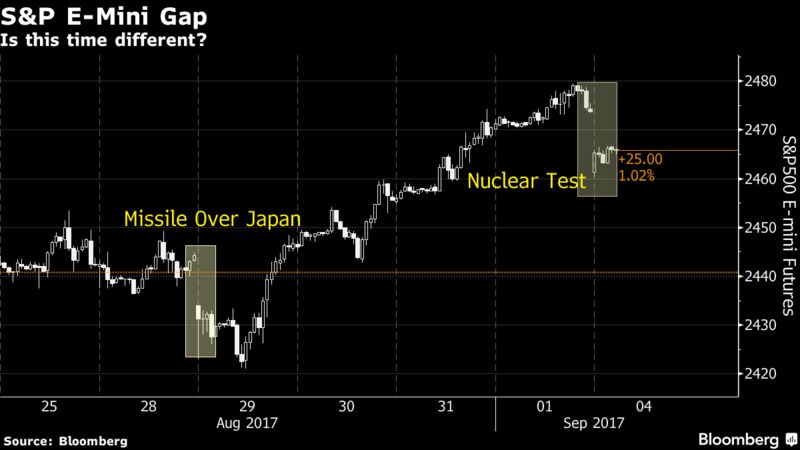 “If North Korea ratchets up provocations again to protest sanctions and pressure from the international community, tensions on the Korean Peninsula could escalate further to a different level from previous cases,” said Chang Jaechul, chief economist at KB Securities Co. “Still, a possibility of a military clash is low on the peninsula.”

Investors are choosing to hold more cash in the face of increasing geopolitical instability. Nader Naeimi, who heads a dynamic investment fund at AMP Capital and helps manage about $110 billion, has about 30 percent of his holdings in cash, while Chicago-based Ariel Investments is holding more cash versus its target in the event a pullback creates buying opportunities.

“We’ve not seen the futures sell off in any sharp way. It seems to suggest that there is a belief, maybe that’s hope, that rational heads will prevail,” Mellody Hobson, president of Ariel, which oversees more than $11 billion, told Bloomberg Television on Monday. “The long-term story is very positive. My belief is that this will work itself out and I am never a believer in overreacting to any news.”

The nuclear test overshadows an average U.S. August employment report on Friday. Nonfarm payrolls rose by 156,000, below the median estimate of 180,000 in a Bloomberg survey of economists, and revisions for the prior two months subtracted 41,000 jobs. U.S. stocks rose and Treasures declined as investors chose to focus instead on separate reports that showed American factories ramped up in August to the fastest pace of expansion in six years, while consumer sentiment climbed to a three-month high amid an improving outlook for household finances and the economy.

Among other key events this week: