EghtesadOnline: U.S. stocks rose and Treasuries declined as reports showing a gain in consumer sentiment and an increase in manufacturing offset a mediocre August employment report.

“The report was marginally disappointing for those looking for higher inflation, but not too far from our expectations,” Andrew Hollenhorst, chief U.S. economist at Citigroup Global Markets, wrote in a report. “Markets, and the Fed, will remain in “wait and see” mode -– primarily focused on prospects for inflation and potentially stimulative government policy."

According to Bloomberg, the Stocks Europe 600 Index gained a third day, with media companies among the winners after Vivendi SA sales beatestimates. The LME Index of six industrial metals soared to the highest in almost three years, with copper leading the charge. Gasoline prices fell for the first time in almost two weeks, after rising 25 percent last month, as traders assessed the impact of Tropical Storm Harvey. Japan’s benchmark bond yield fell below zero percent for the first time since November.

Nonfarm payrolls rose by 156,000, below the median estimate of 180,000 in a Bloomberg survey of economists, and revisions for the prior two months subtracted 41,000 jobs, according to Labor Department data on Friday. The unemployment rate rose to 4.4 percent from 4.3 percent.

U.S. factories ramped up in August to the fastest pace of expansion in six years, driven by employment gains, figures from the Institute for Supply Management showed. And consumer sentiment climbed to a three-month high amid an improving outlook for household finances and the economy, according to a University of Michigan report. 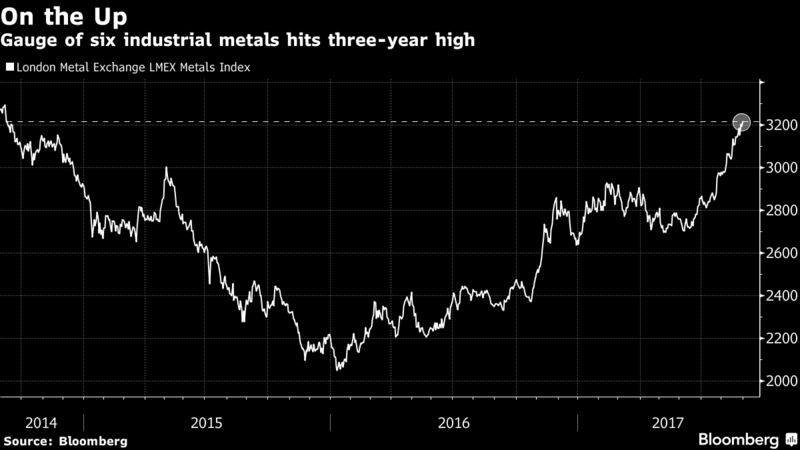 Among other key events this week: