EghtesadOnline: Few Americans care about ethylene. Many have probably never heard of it. As it turns out, this colorless, flammable gas is arguably the most important petrochemical on the planet -- and much of it comes from the hurricane-stricken Gulf Coast. Ethylene is one of the big reasons the damage wrought by Hurricane Harvey in the chemical communities along the Gulf of Mexico is likely to ripple through U.S. manufacturing of essential items from milk jugs to mattresses.

“Ethylene really is the major petrochemical that impacts the entire industry,” said Chirag Kothari, an analyst at consultant Nexant.

According to Bloomberg, Texas alone produces nearly three-quarters of the country’s supply of one of the most basic chemical building blocks. Ethylene is the foundation for making plastics essential to U.S. consumer and industrial goods, feeding into car parts used by Detroit and diapers sold by Wal-Mart Stores Inc.

With Harvey’s floods shutting down almost all the state’s plants, 61 percent of U.S. ethylene capacity has been closed, according to PetroChemWire. Production may not return to pre-storm levels until November, according to Jefferies.

Ethylene occurs naturally -- it’s the gas given off by fruit as it ripens. But it also lies at the heart of the $3.5 trillion global chemical industry, with factories pumping out 146 million tons last year, Kothari said Thursday. 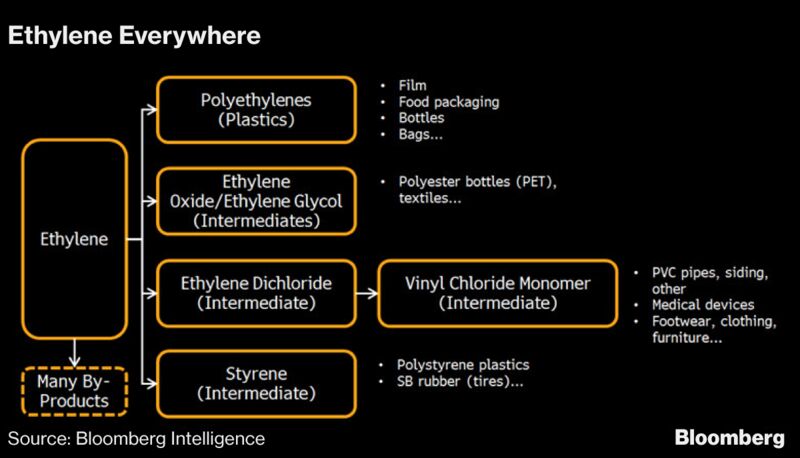 Processing plants turn the chemical into polyethylene, the world’s most common plastic that’s used in garbage bags and food packaging. When transformed into ethylene glycol, it’s the antifreeze that keeps engines and airplane wings from freezing in winter, and it becomes the polyester used in textiles and water bottles.

Ethylene is an ingredient in vinyl products such as PVC pipes used to bring water to homes, life-saving medical devices and cushy sneaker soles. It helps combat global warming with polystyrene foam insulation and lighter, fuel-saving plastic auto parts. It helps commuters get to work safely when made into synthetic rubber found in tires. It’s even an ingredient in house paints and chewing gum.

Man makes the chemical by starting with oil or natural gas, then steam heating it to 1,500 degrees Fahrenheit (816 Celsius) inside massive furnaces that crack apart the molecular bonds. The resulting ethylene gas is separated from co-products such as propylene, and then piped to other production units for conversion to a vast array of products.

Ethylene and its derivatives account for about 40 percent of global chemical sales, said Hassan Ahmed, an analyst at Alembic Global Advisors. The U.S. accounts for one of every five tons on the market, and ethylene plants globally were running nearly full out to meet rising demand before Harvey, he said.

“So any little hiccup -- and this is much beyond a hiccup -- will dramatically tighten supply-demand balances,’’ Ahmed said Thursday.

While Gulf Coast chemical plants are designed to withstand hurricane-force winds and floods, Harvey has thrust the industry into uncharted territory. Ethylene producers hit by the storm along the Texas Gulf Coast include LyondellBasell Industries NV at the southern end in Corpus Christi, Exxon Mobil Corp. in Baytown outside Houston, and Chevron Phillips Chemical Co. in Port Arthur by the Louisiana border.

“The combination of Harvey’s path, duration and rainfall total is wreaking havoc with the supply side of the U.S. chemicals industry on an unprecedented scale,” said Kevin McCarthy, an equity analyst at Vertical Research Partners. “We certainly haven’t seen anything quite like it in our 18 years of following chemical stocks on Wall Street.”

The sudden dearth of ethylene and other materials is being felt up and down the supply chain. More than half of the country’s capacity for making polyethylene plastic has been shut down in the past week. More than 60 percent of production of polypropylene -- another plastic, has been curtailed.

Chemical and plastics buyers can operate about only two weeks before exhausting their inventories, Jefferies analyst Laurence Alexander said in a note. Many producers are already telling customers that they won’t be able to meet their contractual supply obligations because of the storm.

Formosa Plastics Corp., which shut its Point Comfort, Texas, ethylene and plastics plants ahead of the storm, said Aug. 30 that it won’t be able to meet commitments for polyethylene, polypropylene and PVC.

With so much chemical production in the region out of commission, demand for natural gas has plummeted. Producers such as Dow Chemical Co. use gas as a raw material for ethylene and also to power their massive cracking furnaces and other equipment. Added to the impact from widespread electricity outages, demand for gas fell by more than 5 billion cubic feet a day, according to Citigroup Inc. That’s equal to nearly 8 percent of the country’s normal consumption this time of year.

Demand for other key raw materials used to make ethylene, such as ethane and butane, have fallen about 90 percent because of plant closures, according to PetroChemWire.

Given the complexity of the ethylene manufacturing process, and the need to carefully assess damages to ensure safe restarts, it may take many more weeks for production to reach pre-Harvey levels, IHS Markit said in a report Thursday. Jefferies analysts expect much of the lost petrochemical production will return in October with the remainder starting up the following month.

Companies won’t know for sure whether their plants were damaged until they try to restart them, perhaps only then finding that flood waters have ruined a key piece of equipment, Ahmed said.

“No one right now has a very good handle on the full extent of the damage,” Ahmed said.

Even if most of the chemical industry gets back on its feet in the coming weeks, logistical challenges could still stymie the flow of supplies to customers and create supply chain bottlenecks. Rail shipping has been constrained by train tracks damaged by flooding or still under water.

Polypropylene producers could face an average delay of two weeks to ship their product via rail because of the storm, according to IHS. Some resin buyers are seeking supplies outside the U.S. in case of an extended disruption, the consultancy said.

Prices for ethylene-derived products, meanwhile, have begun to show signs of the looming shortage. Polyethylene prices globally have begun to climb on the expectation that U.S. exports will be slashed, IHS said.