EghtesadOnline: Some of the most dramatic evidence of change in Iran since the nuclear agreement that brought sanctions relief to the country is visible in Tehran’s stock market.

In the past 18 months, about 193,000 people have sought permission to trade on the bourse, said Tehran Stock Exchange Corp. Chief Executive Officer Hassan Ghalibaf-Asl. At least 45 companies have asked to list their shares since the Iranian year started in March, and he expects as many as 13 initial public offerings within the 12 months, compared with seven in the previous period, according to Bloomberg.

“The market has been on the rise” since the agreement was implemented in January 2016, Ghalibaf-Asl said in an interview at his office in the Iranian capital. The May re-election of President Hassan Rouhani, who backed the accord, was a further “positive signal” of continuity for the market, he said. 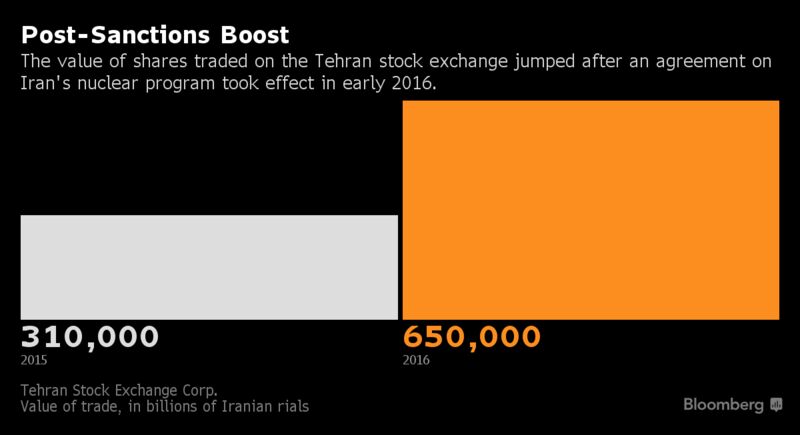 Iran, the second-largest economy in the Middle East with industries spanning energy, mining and autos, holds clear potential for foreign investors and Europeans have been at the forefront of new business deals since the easing of a decade of strict sanctions. But remaining U.S. curbs and concerns that President Donald Trump may undermine the nuclear agreement or slap further measures on the country of 80 million people have slowed the return of banks and companies.

The value of stocks traded in Tehran more than doubled in 2016 to the equivalent of about $19.6 billion as the market’s main index climbed 29 percent. In the first half of 2017, the benchmark dropped 1 percent and the value of stocks traded fell 37 percent. That’s not all due to Trump, said Payam Afzali, head of investment banking at Kian Capital.

“We have false negative sentiment due to the fact that interest rates are so high,” Afzali said by phone from Tehran. “You can get much higher returns if you put your money in the bank. But the message communicated by the government has been time and time again in the past year-and-a-half that we are going to implement policies to bring down the deposit rates, and that is going to affect investors’ sentiment toward the risk of equity in the public market.”

“Politics is important, but it’s not all about political news,” he said. “The market reacts to economic variables.” While Trump’s election and his pressure on Iran haven’t been helpful, real impact on the market would only be felt from steps endangering the nuclear deal, rather than mere talk, he said.

In contrast with the interest shown by locals, foreigners have been slow to participate, partly due to practical difficulties in transferring money and the lack of established brokerage and settlement networks, Ghalibaf-Asl said.

“A foreign investor may want to be present, but the fact is the mechanism, or working with its own brokerage firm, the issue of custodianship -- these are things that need to be addressed,” he said. “Some investment banks abroad are looking at buying brokerage firms in Iran to establish brokerage relations. If these relations happen, the presence of foreign investors will grow.”

Iranian stocks trade at attractive valuations, with average price-to-earnings ratios of seven, compared with the 14 to 16 typical of frontier markets, emerging markets and the rest of the Middle East, said Ramin Rabii, CEO of Tehran-based financial services group Turquoise Partners. But, for Iran to become a mainstream investment destination, it needs to win inclusion in international indexes, he said.

The odds are against that, as “the large banks are not here, large credit rating agencies are not here, because of the fact that American investors are not here,” Rabii said. With U.S. companies compiling many of the global indexes, Iran is unlikely to be included in them anytime soon, “which means that large flows of capital will not happen,” he said.

Here are further comments from Ghalibaf-Asl on the bourse’s efforts to expand trading: