EghtesadOnline: More investors are joining the cast of Wall Street veterans from Jeff Gundlach to Ray Dalio in warning that risky assets are overvalued.

They point to rising global turmoil underscored by the recent terrorist attacks in Barcelona and the racially charged violence in Charlottesville, Virginia, as well as valuations that no longer compensate for potential flareups in North Korea and Venezuela. That’s not to mention the unpredictability in the U.S., where President Donald Trump is feuding with members of Congress before a critical vote to increase the country’s debt ceiling, Bloomberg reported.

Among the assets under scrutiny are emerging-market bonds, which for only the third time in history are yielding less than U.S. junk debt. Some of the world’s largest money managers, from Pacific Investment Management Co. to T. Rowe Price Group Inc., are advising investors to reduce risk by trimming holdings of developing-nation assets.

“Geopolitical risk remains high, particularly in the U.S.,” said Chris Diaz, who oversees about $2 billion as a money manager at Janus Capital Management in Denver. “Valuations in all risk markets, including EM, are fairly full in our view and this would be a reasonable time to reduce risk.” 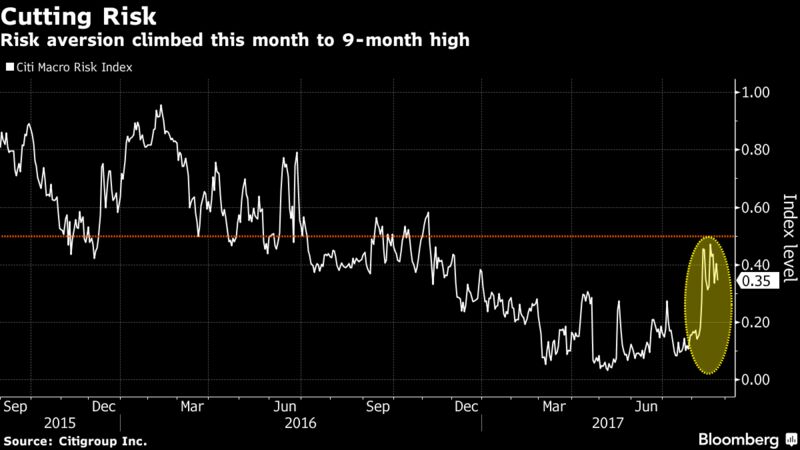 Gundlach, the co-founder and chief executive officer of DoubleLine Capital, said earlier this month that traders should be gradually “moving toward the exits” on riskier securities.

Dalio, founder of Bridgewater Associates, said Aug. 21 that he’s tactically reducing riskas a surge in populism around the world has helped intensify existing conflicts “to the point that fighting to the death is probably more likely than reconciliation.” The billionaire hedge fund manager, who has recommended gold as a hedge against rising political risk, compared the current economic and social divide to 1937, two years before the start of World War II.

"Populism emerges, democracies are threatened and wars can occur," Dalio wrote in a post on LinkedIn. "I can’t say how bad this time around will get. I’m watching how conflict is being handled as a guide, and I’m not encouraged."

Two years ago, Dalio also referenced 1937 when he cautioned that a rally in risk assets, spurred by low interest rates and loose monetary policy, would end in a “self-reinforcing downturn.” That preceded a 12 percent dip in the S&P 500 Index and 5 percent drop in emerging-market dollar bonds later in the year. (Although over the longer term, those assets have returned 18 percent and 19 percent, respectively, since then.)

Chase Muller, a portfolio manager who oversees about $600 million at One River Asset Management, said that the firm sees risk in South Africa, Brazil and Turkey, where the economies haven’t undergone the changes they need to improve potential growth.

Last month, Howard Marks, the co-chairman of Oaktree Capital Group, cautioned in a 22-page memo that markets have become heated and risky. When investor confidence declines, risks in developing nations such as coups, institutionalized corruption, devaluation and debt repudiation are exposed, he wrote. Marks scoffed at traders who are buying Argentine bonds that mature in 100 years despite the nation’s history as a chronic defaulter.

"It’s a sign of the times: ‘Something may go wrong, but probably not too soon,’" he said.