EghtesadOnline: Bank of Japan Governor Haruhiko Kuroda pledged to forge on with very accommodative monetary policy as he warned that his inflation target remains distant and the current pace of growth in the world’s third-largest economy looks unsustainable.

Speaking in an interview with Bloomberg in Jackson Hole, Wyoming, Kuroda also said the BOJ’s yield-curve control program has been working quite well and that he doesn’t see a need to adjust it at present. He added that the BOJ may be able to control rateswhile buying fewer Japanese government bonds and that the market is still "functioning quite well."

The BOJ chief, who joined Federal Reserve Chair Janet Yellen and European Central Bank President Mario Draghi at the mountain retreat for an annual gathering of monetary policy makers, is grappling with an economy that’s in its longest run of expansion in more than a decade but is still failing to generate significant wage gains and a healthy level of inflation, Bloomberg reported.

While Yellen and Draghi are also contending with growth and inflation that are somewhat out of sync, Kuroda views the problem in Japan as more serious.

“The economic and price situation in the U.S. is much, much better than the situation in Japan,” said Kuroda. He noted that Japanese businesses and labor unions still exhibit a “deflationary mindset,” which is crimping price gains and has seen the BOJ delay the projected timing for reaching its 2 percent price target six times.

"Kuroda is saying that he won’t respond to a pick-up in just one quarter," said Hiromichi Shirakawa, chief Japan economist at Credit Suisse Group AG and a former BOJ official. "The economy is doing better than they noted in the outlook report in July and that could fuel debate within the BOJ that they might be able to raise their inflation forecasts. But he is containing this."

While wages have risen to some degree in Japan, firms haven’t had to raise prices, Kuroda said in the interview, citing companies investing heavily in labor-saving equipment and changing their business models to get by with fewer workers.

On a positive note, Kuroda also pointed to a general increase in business investment in Japan. He said the BOJ’s purchases of exchange-traded funds, which were aimed at reducing risk premiums, had contributed to this.

"So in that sense it has been successful, but I don’t think at this stage we can expand this program," he said of ETF purchases.

"Despite the wide fluctuation of long-term interest rates in Europe and the United States, Japanese 10-year JGB interest rate has been very flat, around 0 percent," he said. "And in that sense, yield-curve control has been well managed."

He foreshadowed the potential to reduce purchases because a declining number of bonds in the market "means that with one unit of JGB purchase, the impact on the interest rate could be bigger."

"So that in coming months there will be less and less need to purchase JGBs in order to maintain the yield curve,” Kuroda said.

Yet even if this is the case, the Bank of Japan risks getting out of step with its developed-world peers as it presses on with its stimulus while the Fed raises rates and the ECB debates how to start normalizing policy.

A brief convergence this year in the dollar value of the balance sheets of the Fed, the ECB and the BOJ has passed and the trio are now set to take very different paths. The Japanese central bank may find itself carrying something approaching double the load of its American counterpart two years from now. 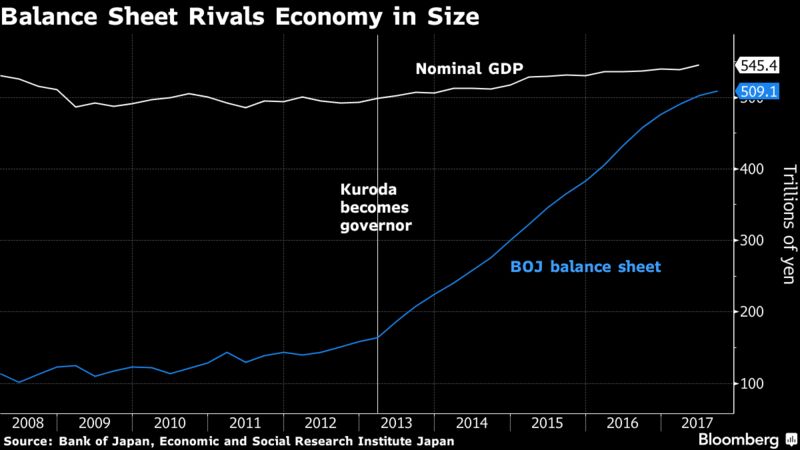 "As the U.S. and Europe move toward an exit, people are wondering why the BOJ wouldn’t do the same," said Hiroaki Muto, chief economist at Tokai Tokyo Research Center. Kuroda is indicating the BOJ won’t be reducing the balance sheet or moving toward policy normalization anytime soon, said Muto.

Kuroda’s term as governor ends in April next year. While there is speculation he could be reappointed, Prime Shinzo Abe’s government has not given any indication of its intentions.