EghtesadOnline: The capacity of China’s central bank to surprise markets is so great that, last week, it left investors chewing over whether a data error was a policy signal.

A closely watched Chinese benchmark rate surged 55 basis points at the open on Wednesday. While the National Interbank Funding Center was cited as saying later that the outsized price move was a mistake, the confusion shows the downside to the monetary authority’s opaque use of interbank tools to adjust liquidity in the financial system, Bloomberg reported.

Investors monitor gyrations in the one-week weighted average repo rate as it’s seen to be a weather vane for People’s Bank of China policy. While the central bank maintains a raft of more traditional benchmark interest rates, it’s focusing more on market-based measures these days, and traders are keenly aware they need to expect the unexpected.

“The tricky thing about what happened Wednesday was that the open prices were surprising, but at the same time not impossible, and this created the confusions,” said Zhou Hao, a senior emerging-markets economist at Commerzbank AG in Singapore. “Some participants tend to see a surprise move as a normal way for the authorities to deliver new policy steps.”

China’s central bank -- among the least transparent in major Asian economies as ranked by Bloomberg Intelligence -- is known to sometimes resort to surprise market moves to communicate policy. In June 2013, it made no change to its goal of “prudent” monetary policy even as it drove the overnight repo rate to a record in what was seen as a stress test for banks. It has spread its influence to Hong Kong’s overseas market as well, pushing offshore yuan borrowing costs to improbable levels to crush currency speculators.

Policy makers have since then taken steps to give more clarity on their thinking. The latest came earlier this month, with a statement urging investors not to focus too much on short-term concerns and saying a diverging pace of credit expansion doesn’t mean monetary policy is losing steam.

“The PBOC has made great progress in becoming more transparent and improving public communication,” said David Loevinger, managing director of emerging-markets sovereign research at TCW Group Inc. and a former China specialist at the U.S. Treasury. “Still, while there’s a lot of statements coming from various PBOC officials, it’s sometimes hard to discern who’s speaking with authority. All central banks have struggled with market guidance; still, by almost any measure, the PBOC remains among the least transparent.”

The PBOC declined to comment on faxed questions on how it plans to improve communications with the market. The National Interbank Funding Center -- a central bank arm that manages China’s money-market trading platform -- doesn’t have a statement regarding the price changes, a media officer said in a text message. 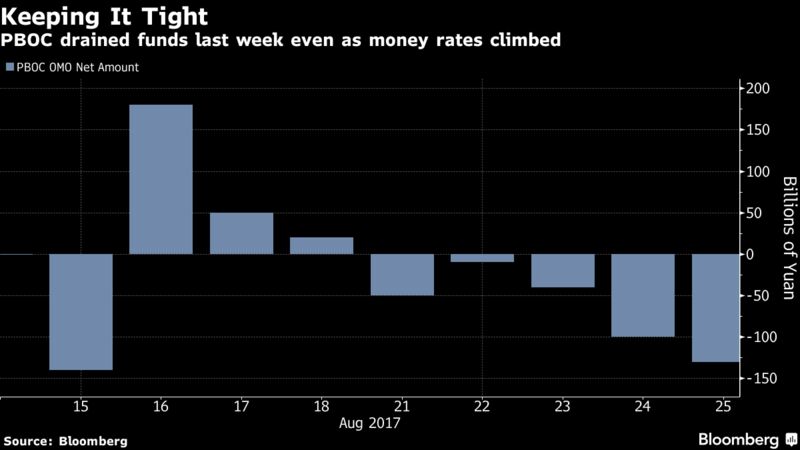 The Aug. 23 spike in money rates saw the seven-day weighted average repo rate surging to 3.44 percent, which would have been the highest since April 2015. It came at an especially jumpy time for investors, with policy makers pushing rates higher as part of an effort to reduce leverage in the financial system. Last week, the central bank draineda net 330 billion yuan ($50 billion) in open-market operations, the most since June. The 20-day moving average of the overnight repurchase rate is at 2.82 percent, near the highest since April 2015.

The central bank, in its first-quarter monetary policy report, said that it would mainly use seven-day loan tenors in its open-market operations. The measure’s first few prices tend to tumble in the mornings, before moving higher later in the day.

“Chinese authorities have made some progress in improving communications, but there is still a lot to be done,” said Carol Pang, fixed-income director at Zhongtai International Holdings Ltd. in Hong Kong. “A situation where investors have to ask each other to figure out what’s going on with policy isn’t ideal.”