EghtesadOnline: Leaders of the world’s most powerful central banks defended post-crisis reforms at their annual retreat in Jackson Hole, Wyoming, while discussing the causes and consequences of populist waves that have reshuffled the political order in the U.S. and Europe.

Monetary policy wasn’t a major focus during the three-day gathering. When it was discussed, the messages from the Federal Reserve and European Central Bank stressed their gradual approaches to unwinding emergency-era stimulus as global growth picks up, according to Bloomberg.

Policy makers instead poured over the pros and cons of free trade and made a full-throated defense of the safety net created since the 2008 financial meltdown, which President Donald Trump wants to roll back. Britain’s vote to divorce from Europe, Trump’s election and the anti-immigrant presidential candidacy of Marine Le Pen loomed large over the event.

Top officials came out swinging against populist rhetoric. Fed Chair Janet Yellen gave her strongest defense yet of embattled financial rules, while her euro-area counterpart Mario Draghi warned of protectionism’s perils. Economists chewed over how to mitigate globalization’s distributional problems in a way that doesn’t subtract from already-tempered global growth.

Protecting growth is an important priority for central banks, because weak GDP gains curb how high they can raise interest rates, limiting how far they can cut rates to fight a recession.

Economists generally favor free trade, because it boosts standards of living, drives down product and service costs and improves idea dispersion. But it also created haves and have-nots, driving wealth toward networked cities and the highly educated while shifting manufacturing jobs away from developed countries.

Anger over those changes became a rallying cry for leaders such as Trump, who has advocated tighter immigration controls, renegotiating trade agreements and preventing off-shoring -- all with the goal of reinvigorating middle-class wages.

The U.S. president has also been taking aim at the Dodd-Frank Act, the 2010 law enacted in response to the financial crisis, which he and congressional Republicans blame for handicapping the U.S. economy. Yellen, in perhaps her final speech at Jackson Hole as Fed chair, took issue with Trump’s narrative.

“Core reforms we have put in place have substantially boosted resilience without unduly limiting credit availability or economic growth,” she said. “Any adjustments to the regulatory framework should be modest and preserve the increase in resilience.” Yellen’s term as chair expires in February and economists polled by Bloomberg don’t expect Trump to pick her for another four-year stint.

Slow progress aside, the global economy is in its best shape in nearly a decade. The Fed is gradually reducing monetary accommodation and the ECB is contemplating when to begin tapering mass asset purchases, even though inflation lingers below central bankers’ targets in both places. 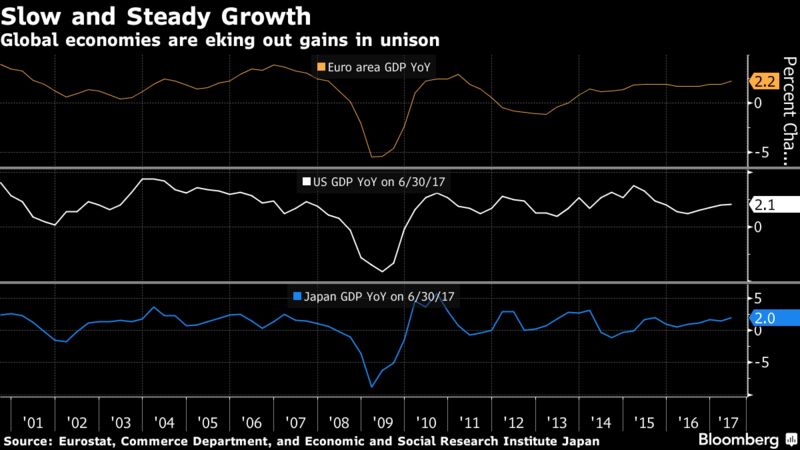 Jackson Hole discussions offered little insight into the outlook for those policies, and the limited comments policy makers did make hardly budged the needle.

Yellen largely avoided talking about the current state of the economy or the outlook. Bank of Japan Governor Haruhiko Kuroda, in a Bloomberg Television interview, said that the recent pace of growth in the world’s third-largest economy is probably unsustainable and pledged to continue with very accommodative monetary policy “for some time” because inflation is still too low.

Draghi reiterated that that the ECB will go extremely slowly when it starts removing monetary stimulus, with a decision expected in the autumn. He said inflation is taking time to converge to the bank’s 2 percent goal, in part because wages respond only slowly to a closing employment gap.

Low wages were a subject of discussion for other reasons.

"It’s increasingly important that we understand the causes in this fall in labor share of income” at a time when “more and more people have become angry and aggrieved because they feel that they have been left behind,” said Norman Chan, chief executive officer of the Hong Kong Monetary Authority. Chan warned that “distributional impacts are something that we cannot ignore.”

A major focus of the globalization discussion at the forum centered on the idea that it’s technology, not just trade openness, that’s fueling manufacturing job losses.

“At some point, maybe it doesn’t matter if it’s trade or technology -- what matters is the workers,” said Peter Schott from the Yale School of Management. “A lot more research needs to be done to find the exact, micro-level channels that are preventing re-allocation.” 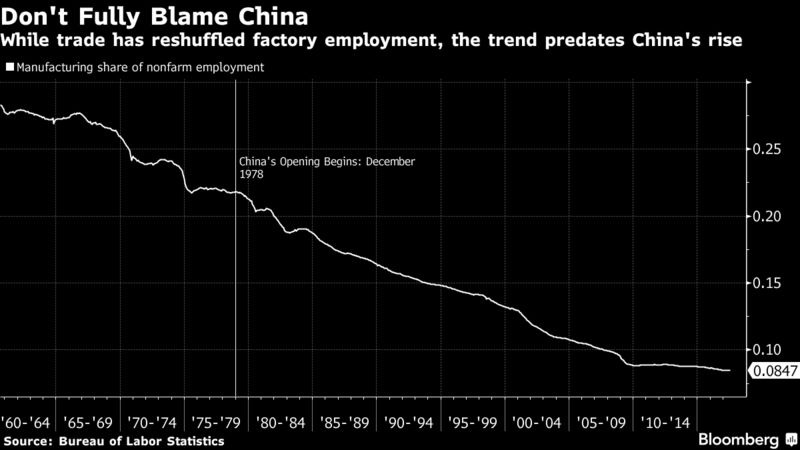 Against a backdrop of stagnant pay, policy makers could feel intensified pressure to keep rates lower for longer to overheat the labor market, warned Alan Auerbach, a University of California, Berkeley, economist. "The role for monetary policy here is limited, but the pressure on monetary authorities is not,” Auerbach said.

Some policy makers rebutted the idea that monetary policy would ever be set with inequality in mind, in part because it’s a blunt tool that can’t target specific, disadvantaged groups. Still, others noted that understanding how the earnings distribution is shifting is crucial to making growth sustainable.

“We have to understand the environment in which we’re we’re acting,” Cleveland Fed President Loretta Mester said in a Bloomberg Television interview in Jackson Hole.