EghtesadOnline: Donald Trump grabbed investors’ attention in an otherwise listless Asian trading session, with the yen rising and S&P 500 Index futures slipping with the Mexican peso as the U.S. president said he may end the North American Free-Trade Agreement.

Some of the earlier risk-on trade was unwound, with the dollar pulling back after Trump also threatened to shut down the U.S. government if he is unable to get funds to build a wall along the Mexican border. Asian stocks stalled, with benchmarks coming off their highs in Tokyo and declining in Sydney and Shanghai. Hong Kong’s trading session was canceled for the day as a typhoon buffeted the city. 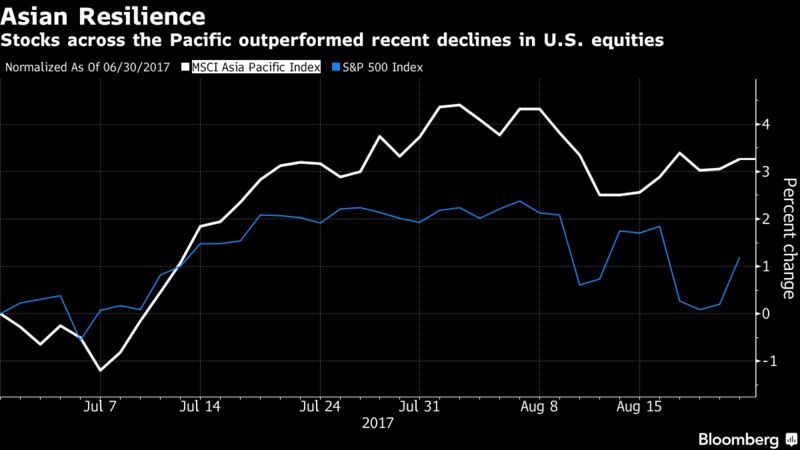 According to Bloomberg, Asian shares struggled to make headway following gains on Wall Street on Tuesday on optimism the Trump administration is making progress on tax reform. Instead, traders assessed the prospects of the administration to advance its agenda as the U.S. president addressed a rally of his supporters in Phoenix designed to put behind him criticism following his response to violence in Charlottesville.

“His comments on the Nafta negotiations once again brings the general direction toward obstructing free trade and raises concerns over its impact on global trade,” said Hideyuki Ishiguro, a senior strategist at Daiwa Securities Co. in Tokyo.

There is little top-tier economic data out this week and volumes are being kept low by the Northern Hemisphere summer. The focus turns to the annual conference of global central bankers that kicks off in Jackson Hole, Wyoming, on Thursday with sentiment among investors that global policy makers seem reluctant to tighten liquidity. Geopolitical events continue to hover in the background. The U.S. tightened its financial restrictions on North Korea, slapping sanctions on Chinese and Russian entities it accused of assisting Pyongyang’s development of nuclear weapons and ballistic missiles.